May 3, 2017 in Business, Communications, Companies by Editor

May 3—Uganda Telecom, the country’s biggest fixed line network has gone into provisional administration in the […] 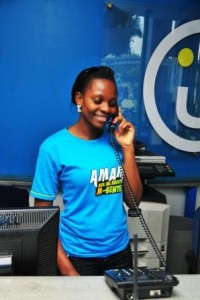 There is little to smile about as the company has been hurt by lack of new capital investment as rivals have left it behind.

May 3—Uganda Telecom, the country’s biggest fixed line network has gone into provisional administration in the wake of wrangles with the Libyan majority shareholders and a rising pile of debt but with no sign of the $50 million it so urgently needs to get the business back on track.

Speaking in March, the company’s Board Chairman, Stephen Kaboyo said, “$48 millon can make an impact in the UTL turnaround.” Sources say total debt is just over $50 million.

Bernard Twebaze, the recently appointed Official Receiver said.“As we speak right now, UTL is heavily indebted and my job is to get the company out of this debt. But most importantly run it as a going concern which is also profitable. Provisional administration will ensure that creditors get maximum returns and my responsibility is also to get the debtors to comply and pay what is owed UTL.”

Twebaze is now the interim chief executive of the company, but declined to go into further details. UTL officials insisted it is still early days and Twebaze needed time to settle into his new responsibilities. Minutes earlier, Mark Shoebridge who until April 28  was the managing director, was seen pacing a hotel corridor glued to his mobile phone as Board Chairman, Stephen Kaboyo concluded  a meeting with 400 staff of the company. The meeting was intended to reassure them and lay out the future strategy.

Twebaze said, “We cannot deliver what we want to deliver without human resources and the staff have recommitted themselves to keeping the business going.”

LAP Green of Libya (through UCOM) owns  69% of UTL while the rest of the shares are held by the Uganda government. But for several years now, the company has suffered financially due to lack of capital investment, complicated by the UN sanctions on Libya. In the meantime, UTL has lagged behind rivals in maintaining and signing up new mobile subscribers and of late, provisions of data services. It has less than a million mobile subscribers.

Even after the sanctions were lifted however, LAP Green, now a subsidiary of the Libyan Post Telecommunication and IT Company (LPTIC), has been lukewarm over any injection of cash into UTL prompting the government to take unilateral action.

Yet in December, Dr. Faisel Gergab, the LPTIC Chairman was in Kampala and had talks with President Yoweri Museveni supposedly to agree on a plan to turn around the company.

“Our talks with President Museveni were very fruitful and positive. We see an exciting future for UTL as it begins the transformation from legacy old-style PTT to a modern ICT company that will offer high quality and competitive services,’ Dr. Gergab said in statement.

He said, “As part of a bold transformation plan, UTL will be upgrading its technology in the next year, adding 4G capabilities to provide a wide range of high-quality, high-speed data services to both mobile and fixed customers.”

Apparently once Dr. Gergab got back home all these promises were forgotten. Sources say disagreements over the Uganda government’s unpaid bills to UTL and who should fork out cash first to save the company, led to a frosty atmosphere that chilled any further talks. In February, finance minister, Matia Kasaija said “In light of the above, Government has decided to take over the affairs and management of UTL with immediate effect, and will engage UCOM for orderly takeover.”

LPTIC said the government showed an ‘institutional unwillingness’ to reach agreement on a rescue package.