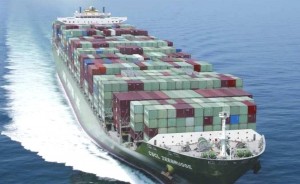 In spite of a surge in imports, conference participants were told that poor linkages among transport modes was causing long delays.

December 15–Worldwide shipping container volumes are set to break the 200-million twenty-foot equivalent unit (TEU) threshold by the end of 2017, however sub-Saharan Africa continues to be hamstrung by infrastructure bottlenecks after long years of neglect and slow adaption to modern logistics trends.

However in East Africa, Dar es Salaam and Mombasa ports are in the midst of  ambitious expansion and upgrading of facilities with new container terminals as a centre-piece of these developments.

Speaking at the inaugural two-day Terminal Operators Conference Africa 2017 at the Durban International Convention Centre this week,  Siyabonga Gama, the Transnet Group CEO said, “The combination of years of under-investment and exploitation has meant that African ports, roads and railways were mainly designed and built to facilitate transportation of raw materials and resources to markets outside the continent.”

The problems include poor linkages among transport modes causing long delays and raising costs in the movement of international freight.  Many logistical services on the continent are in their infancy and their development is being impeded by a wide array of administrative, regulatory and governance barriers.

Besides limited advance planning sub-Saharan Africa is also beset by a lack of capacity building and skills development in the freight-handling sector on top of under-investment in port, rail and pipeline infrastructure and not enough advance planning.

The two most common international standardised container types are 20 and 40 foot. A 20 foot unit measures about six metres, a 40 foot about 12 metres (external dimensions). Depending on whether the ship loads 20 or 40 foot containers (or a combination of the two), the number of containers held on board the ship will differ.
In terms of costs, reference is often made to costs per TEU, which means that these costs will double for 40 foot containers. TEU is also used to indicate the nominal capacity of container ships or container terminals and in statistics regarding container transit in ports.Quoting the 2017 African Economic Outlook report by published by the African Development Bank, Gama said from 2007 to 2015, Africa’s light manufactured goods imports tripled to reach $260 billion. “With such a high dependence on external trade, productive and efficient ports are critical for Africa’s growth. All of us here today have a vested interest in ensuring our countries optimise freight efficiency and bring products to market faster across the continent — and for less cost.”

Gama said the cost of moving goods was still very high and is passed on to the consumer, thereby impeding Africa’s ability to be competitive in pricing. “Effective transport networks are a key component of the investment climate, enabling access to markets and reducing the costs of doing business. Africa’s challenges are not only the lack of investments in infrastructure, but also the distance between the hinterland and port.”