July 18, 2018—Uganda’s building, construction and real estate sector accounted for 30.3 pc of the total UGX896.5 billion (nearly $200 million) private credit extended in May 2018, according to the monthly report for June published by the finance ministry in Kampala early this week. 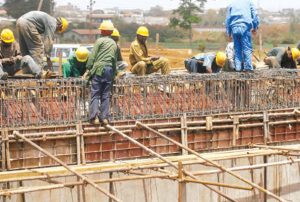 A weakening shilling has seen a hike prices for some construction materials, but the government’s intent on modernising infrastructure and sustained private investment in developing property have helped keep the sector buoyant.

Trade and personal loans accounted for 28 pc and 15.7 pc respectively, but there was a decline in the share of loans given to manufacturing and agriculture.

A weakening shilling has seen a price hike for some construction materials, but the government’s intent on modernising infrastructure and sustained private investment in developing property have helped keep the sector buoyant.

On the other hand, the Uganda Bureau of Statistics (UBOS) findings show that the average input prices at the whole construction sector (covering material prices, wage rates and equipment hire rates), increased by 2.3 percent for the year ending May 2018 compared to 1.0% increase for the year ended May 2017.

Similarly, the value of loans approved and thus credit extended to the private sector increased by 25.2 pc from UGX715.8 billion in April to UGX896.5 billion in May 2018.

However, this resulted into increased stock of private sector credit as credit extended during the month more than offset the loan repayments by UGX 106.4 billion.

In June UBOS released the latest Gross Domestic Product (GDP) numbers which indicated that the economy is estimated to have expanded by 5.8 percent in FY2017/18, an improvement compared to the 3.9 percent growth in FY 2016/17.

According to the finance report, the downward trajectory of Annual Headline Inflation since October 2017 was reversed in June 2018 as Inflation rose to 2.2 percent up from the 1.7 percent in May 2018. This was mainly on account of increased price of food crops and fuels such as charcoal, firewood, kerosene and diesel.

The main reason of a weakening shilling is due to the global strengthening of the US Dollar, increased demand by importers in anticipation of new tax measures and quality and environmental standards to be effected in the new financial year, and multinational companies transferring some of their profits at the close of their financial year.