Home » U » Common documentation at EAC borders to become compulsory 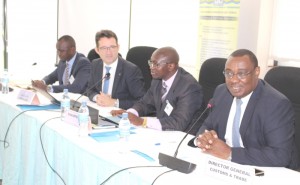 October 2—East African Community (EAC) member states will soon have to use common documentation at all border points to ease trade and bring the region in line with latest requirements of the World Trade Organization (WTO).

The measure, which is a central plank to the WTO Trade Facilitation Agreement (TFA), is also expected to further reduce the cost of doing business across borders.

Kenneth Bagamuhunda, the EAC Director General (DG)-Customs and Trade, said this was an integral part of the EAC Customs Union Protocol which explicitly provides for reduction in the number and volume of trade documents.

Burundi, Kenya, Rwanda, South Sudan, Tanzania and Uganda make up the EAC which takes in a market of 150 million people and in 2016 generated a GDP of about $140 billion.

Bagamuhunda was speaking during a Roundtable Conference on Trade Facilitation held at the EAC Headquarters in Arusha, Tanzania last week. Participants were told that revenue losses from inefficient border procedures in some African countries are estimated to exceed 5% of GDP.

The WTO Agreement on Trade Facilitation entered into force on February, 2017 following its ratification by two-thirds of the WTO membership, including two EAC Partner States, Kenya and Rwanda.

The TFA contains among others provisions relating to the transparency, expediting the movement, release and clearance of goods, including goods in transit. It also sets out measures for effective cooperation between Customs and other border agencies on trade facilitation, customs and trade compliance issues.

Amb. Arthur Mattli, Switzerland’s Representative to the EAC, said his country believes bureaucratic delays and ‘red tape’ pose an unnecessary and expensive burden for moving goods across borders for traders.

Citing a 2013 Organization for Economic Cooperation and Development (OECD) study, James Kisaale, an Assistant Commissioner with the Uganda Revenue Authority, said reducing global trade costs by 1% would increase worldwide income by more than $40 billion, with developing countries being the biggest beneficiaries.
Kisaale said the areas that would contribute the most to lowering trade costs in sub-Saharan Africa were formalities, namely automation, the simplification and harmonisation of documents, and information availability.

The talks brought together EAC Development Partners as well as Customs and Trade experts from the EAC Secretariat and Partner States’ Ministries of Trade.

Bagamuhunda said an EAC Trade and Facilitation Sub-Committee is now in place to, among other things, supervise the implementation of the WTO TFA at regional and national levels.

He said Regional and National Implementation Plans for the WTO TFA have been finalized and adopted by the Policy organs. He said, “Amendments of regional laws, regulations and procedures; development of project proposals for resource mobilization, and; sensitization of stakeholders is currently underway.”

Bagamuhunda referred to the Single Customs Territory (SCT) and the interconnectivity of customs systems among the other key TFA components that have been implemented by the EAC.

“The SCT provides for the free circulation of goods, reduces cost of doing business, reduces Non-Tariff Barriers (NTBs), ensures competitiveness, boosts business predictability and promotes investment,” he said. He said SCT relies on the use of electronic systems. 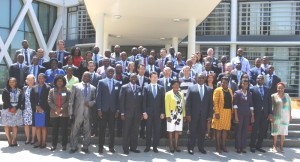 Customs and trade officials from the EAC were joined by representatives of the Community’s Development Partners.

Other components already implemented are: the establishment of One-Stop Border Posts; harmonization of standards, reduction of NTBs, and; publication of the EAC Trade and Investment report.

Amb. Mattli said Switzerland had so far disbursed $3.5 million as part of its contribution to the TFA’s Trade Facilitation Support Programme, a multi-donor programme of the World Bank Group’s Trade and Competitiveness Global Practice. This provides support for countries seeking assistance in aligning their trade practices with the WTO TFA, including the EAC bloc.

“Every country is eligible to receive support under the programme. Eligible countries are expected to have demonstrated a strong commitment to implementing trade facilitation reforms in the areas covered by the WTO TFA. Moreover, the support programme will prioritize assistance to countries with other limited access to other donor support,” Amb. Mattli said.