Dr. Kwena Kizito is a researcher at the Kenya Agricultural and Livestock Research Organisation, […] 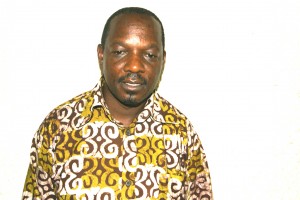 Dr. Kwena Kizito is a researcher at the Kenya Agricultural and Livestock Research Organisation, (KALRO). He is part of the team of scientists in Eastern and Central Africa that is implementing ASARECA supported projects promoting Climate Smart Agriculture. In this interview, he argues that up scaling Climate Smart Agriculture to landscape level could help African countries adapt and avoid the worst of Climate Change – Excerpts.

What are climate smart landscapes and what is their potential to help Africa cope with the hazards associated with Climate Change?

The starting point is that we have an elephant in the room, in the sense that issues of food security and poverty have refused to go away from the region over a long time. That situation has now been compounded by climate change and what we are saying that climate change should not be seen only in a negative sense because it is coming with huge opportunities that can help us get the elephant out of the house.

Most climate models are optimistic about the rainfall situation in the East African region where vast areas of land are arid or semi-arid. This has been a major challenge because and for a very long time we have not known what to do with them as far as agriculture is concerned. But they are now predicted to experience good amounts of rain if climate change comes to pass, without necessarily compromising rainfall patterns in those areas that are already getting good rains.

That is a huge opportunity considering the vast areas in the region that arid to semi-arid lands occupy. The challenge is how we harness this opportunity. We are saying that with Climate Smart Agriculture, it is possible to harness this opportunity but unfortunately, most climate smart interventions limit us to a farm or plot level to the extent that the desired impact we want to see for the whole region may not be realised. That is why we are saying that we need to broaden our scope and that is how the Climate Smart Landscape approach comes in. Let us apply climate smart agriculture technologies on larger scale, on a landscape scale, a village scale, community scale, or a county scale.

What systematic changes would be required to achieve the scale of adaptation you propose?

Looking at the semi-arid areas, pastoralism is the most common economic activity for the people living there. Is the predicted increase in precipitation going to dictate radical shifts in livelihood activities such as a move from livestock to crop culture?

Even without climate change, we had no option because these other places are close to their limit.

What do you do to convince people to adopt a different culture, how do you get a Turkana or Karimojong for that matter to swap pastoralism for cultivation?

Some of them are already abandoning traditional livestock for improved breeds and it is working miracles for them. So with or without climate change, people would change.

Africa is also a place where both plenty and scarcity often have the same consequences with a shift to either side of the median spelling disaster. To what extent are we prepared for wetter dry lands and what are the different levels at which we need mindset change?

At all levels because for one seasons have changed. The onsets have shifted but people are still using the old calendars to plan and that is why they are missing out on some of those opportunities. What we are telling them is even ordinarily, there are no good or bad seasons. If a season is bad for maize, it could be good for cowpeas or green gram. So instead of missing out on a season just because it is not good for maize, why don’t you plant these other crops, harvest, sell and buy all the maize that you need? That is why through climate smart agriculture we are giving them advisories based on rainfall forecasts. We tell them that you are going get less rain this season so do not put a lot of effort into maize or those crops which need a lot of rain, so you are better off with crops which mature within a very short time. If the forecast promises a lot of rain in one season, you are free to invest in high yielding varieties so that you take advantage of a good season and minimize losses in a bad season; we want to demystify the notion that there are bad or good seasons.

You have been carrying out pilots in different places, where has this worked?

Through the support the support of ASARECA with program funding from the World Bank, it has worked for us under the improving Agricultural Water Productivity Project in Malawi. In Madagascar, they have been able to increase rice yields from less than two tones to over 4 tons per hectare. They have been able to increase onion yields from less than 10tons per acre to 25tons and most of these gains are coming offseason based on the forecast. So they are able to take advantage of the market opportunities.

For a very long in Machakos, Kenya and Makueni, farmers have been relying on relief supplies. For the period we have intervened using those advisories, over 70 percent are now food secure, just based on advisories. The government now has started a huge programme on issuance of advisories to the farmers because that is the most powerful tool in the arsenal against climate change and variability.

You mentioned earlier that most farmers are poor and yet CSL require significant financial investment. What is the responsibility of governments to drive the replication of these initiatives on a national scale and to what extent have you been able to convince governments to buy into this idea of climate smart landscapes?

Based on the impressive results we have in Makueni for instance, the County government of Makueni has put in Kshs 7 million ($70,000) to upscale that work. As we speak, they have done a road to our demonstration site so that farmers within the county can go there to see what is happening and apply it on their farms. So there is a lot of goodwill on the part of government to upscale what we are doing there and we have just done a draft MoU to upscale that work throughout the county. That tells you how much importance the government and these other stakeholders attach to what we are doing.

That is impressive but how do you get this up scaled to a national or even a regional level?

We have demonstrated that these things work. The bottom line is that we have problems of food, land degradation and poverty. We have provided a solution and it is now up to the governments and development agencies to appreciate that we now have a vehicle to solve these issues.

Many commentators including scientists bemoan the gap between policy makers and scientists that has left a lot of the knowledge and innovation in the labs and researcher’s files. How do we get the politicians on board?

It is paradoxical that the politicians who represent people that are everyday crying about lack of food, people who say they cannot make ends meet because they are poor cannot go out of their to visit some of these projects that are in their neighborhood so that they can motivate for government funding? What we have done is to demonstrate that these technologies can work in our local situations. You don’t need to travel to Israel to look for solutions that are available here in Machakos, a serious person should come to Machakos for these lessons.