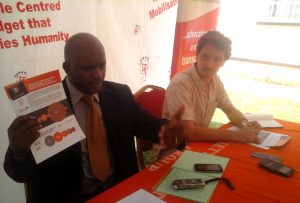 Mukunda displays the findings of their recent poll that contains the views of respondents who  mostly wanted more spending for education, health and agriculture.

February 2— The government has been asked to reassess its expenditure priorities to ensure the interests of the majority of the citizens are catered towards improving the quality of life and lifting millions of Ugandans out of poverty.

At present 19% of Ugandans live below the poverty line in a population of 39 million.

The Civil Society Budget Advocacy Group Coordinator, Julius Mukunda said, “It is vital  for citizens to shape budget  priorities to ensure  public  expenditure is in tandem with their needs. Failure to involve the local people is violation of their rights since the Constitution calls for it.”

Holding a news conference this week, Mukunda laid out the CSBAG view on the proposed budget for financial year 2018/2019. He said on several occasions the government allocates huge resources in sectors that are not directly beneficial to large pockets of the population. The national budget for 2017/18 was just over $8 billion.

CSBAG is a coalition formed in 2004 to bring together CSOs at national and district levels to influence Government decisions on resource mobilization and utilization for equitable and sustainable development.

CSBAG recently completed a mini pre-budget poll  that sought and highlighted citizens’ most critical needs. It was spread over 115 districts across the country and divided in nine sub-regions to provide  a platform  for citizens  to air  their concerns.

Most respondents want the government to increase investment in social services, such as education, health and agriculture. On the infrastructure side, only 15.5% are interested in governments investing in roads and energy but currently to about 53.67% of the national budget is going towards these projects

According to Mukunda, there is a mismatch between the government’s planned expenditure and the citizen’s most pressing needs. The results  could  offer  some insights  into why  about 3.4 million  Ugandans  slipped into poverty  between  financial year 2012/2013 and financial year 2016/ 2017.