November 8—China is giving Uganda a $30 million grant to upgrade its Customs services which will quicken the processing of goods at the country’s frontier points. 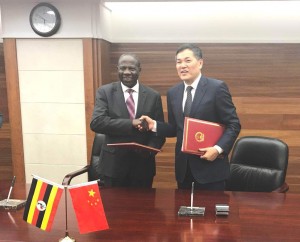 Kasaija and Dr. Keming signed the agreement on the sidelines of the Second session of the Joint Commission on Trade, Economic, Investment and Technical Cooperation in Beijing last week.

Formalities were finalized in Beijing last week after Matia Kasaija, Uganda’s finance minister and Dr. Qian Keming, Vice Minister of Commerce of the People’s Republic of China put pen to paper. The grant agreement was signed on the margins of the Second session of the Joint Commission on Trade, Economic, Investment and Technical Cooperation.

Dr. Keming said the grant demonstrates the value China attaches to its relationship with Uganda and promised continued support to help in the country’s economic development. Grants are conditional which means the installed equipment will probably be sourced from China. China is also currently Uganda’s top lender for major infrastructural projects across including power dams and roads.

Kasaija expressed for the gesture and said it will support government in limiting revenue losses as well as facilitate trade and border management.

During the bilateral meeting, both sides reviewed the status of economic cooperation in the areas of trade, investment, infrastructure and development cooperation. The meeting agreed on strategies to support Uganda’s competitive products access the market in China, promote the country’s touristic attractions as well as boosting investment and industrial capacity.

The Joint Commission on Trade, Economic, Investment and Technical Cooperation is a bilateral mechanism that meets regularly to review implementation of agreed decisions and prioritize areas that promote trade and economic cooperation between the two countries.