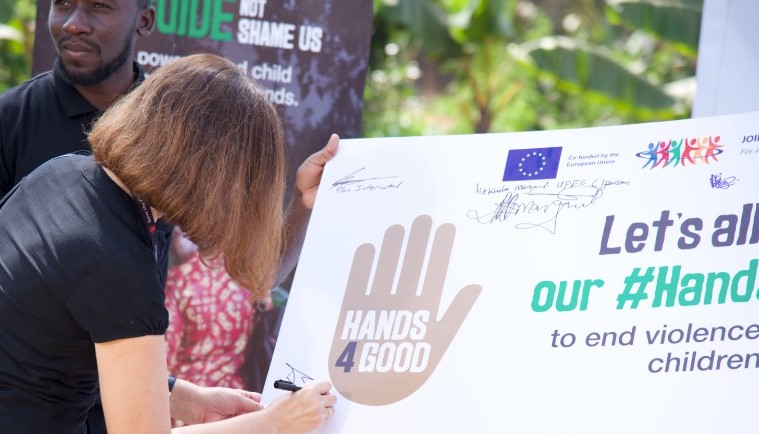 Child rights advocacy group Joining Forces -a coming together of six child rights organisations- has embarked on a campaign it hopes will reduce the incidence of physical violence directed at children in Uganda.

Supported by the European Union, the nine-month campaign will use a variety of media platforms, to try and persuade parents and caregivers, in Gulu, Obongi, Kampala, Wakiso, Busia and Bugiri districts, to adopt non-violent parenting methods.

Physical violence has been documented as one of the most reported forms of violence directed at children, accounting for 27pc of all cases reported to the Uganda Child Helpline. According to a report by Joining Forces, close to 66pc of children interviewed reported an increase in physical or emotional violence from their caregivers in the month leading to December 2020.

“These statistics should worry us all and motivate us to join hands and end this form of violence. They also reveal that there is an overwhelming need to provide practical support to parents and caregivers so that they can provide nurturing care and support to children. This need inspired the creation of the Hands4Good campaign”, Dragana Strinic, Save the Children Country Director said in remarks during the launch of the campaign March4.

Tagged Hands4Good, the campaign urges parents and caregivers to use their hands to nurture, support, and guide children rather than using them as instruments of violence against their own children. The campaign will work with community champions to embed the message of non-violent parenting. The champions will support their communities to work towards ending physical violence, identify children at risk of physical violence, and ensure that these children access services that will provide the support they need. The campaign will also popularise the Parenting Without Violence methods which support parents and caregivers to gain increased understanding of child development and how to use positive discipline with their children. It is hoped that subsequently, children will be able to live in safe and loving environments.

According to Strinic, nearly all adults in Uganda have experienced one or more forms of physical violence during their childhood. This has in turn convinced many of them to believe that it is the only way to discipline a child.

“There are many belief systems and sayings that are often used to justify violence against children. Today we want to say that there is no justification for violence against children. We can discipline our children without inflicting pain on them. We can use non-violent methods that will build trust and a good relationship between a parent and a child, rather than causing harm and ruining their self-confidence,” Strinic said.

She added that it should be a matter of concern to all that close to 60pc of adolescents aged 10-19 years have experienced physical violence while 42pc have suffered emotional violence. She called on members of parliament to make corporal punishment unlawful in Uganda’s homes, just as it has been outlawed in schools.