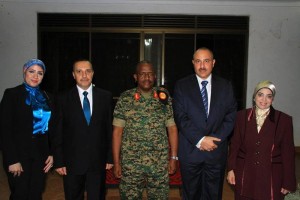 The duo swapped credentials in a ceremony at the Egyptian Defence Office in Kampala that was among others attended by the Egyptian Ambassador to Uganda H.E Tarek Sallam, the Joint Chief of Staff of the Uganda Peoples Defence Forces Major General Joseph Musanyufu, Special Forces Commad chief Brigadier Don William Nabasa  and UPDF Spokesperson Brigadier Richard Kalemire.

Col. Abo thanked the Ugandan military and defence attaches accredited to Uganda for their cooperation during his tenure.