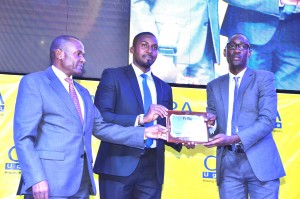 In a speech read for him by Elliot Mwebya (left), Kasekende said under-reporting in a bid to dodge taxes, does more harm than good.

November 13— Dr. Louis  Kasekende, the Deputy Governor, Bank of Uganda, has advised the business community to understand the benefits which firms can derive by regularly preparing proper financial accounts that comply with best practice and global reporting standards.

“I want accountants and companies to reflect on the contribution which financial reporting makes to a developing economy and in particular the growth of a modern business sector,” he said.

This was during the 7th edition of the Institute of Certified Accountants of Uganda (ICPAU) Financial Reporting (FiRe) Awards ceremony which attracted high corporate attendance. The awards were first held in 2011 and over the years attracted more participation from various corporate entities across the country.

In the speech read on his behalf by Elliot Mwebya, the Executive Director in the Governor’s Office, Kasekende said  in attempt to dodge taxes,many accountants in Uganda, tend to under-report the financial situation of companies, a situation he said which does more harm than good. He said business growth in the country is also limited by the large informal sector that continues to struggle with governance issues and prefers to operate on the fringes of formality.

He said, “The business sector in Uganda is dominated by small and medium scale enterprises (SMEs).  The most recent comprehensive data which are available from the Census of Business Establishments indicates that the average number of employees of a registered business is only 2.3%.  As is the case elsewhere in Africa, SMEs in Uganda struggle to expand. The vast majority of them never expand enough to become large firms. Of the approximately 460,000 registered businesses in Uganda, less than 1,000 have more than 50 employees,” he said.

The theme this year was, ‘Moving beyond the Numbers: Unlocking Value through Reporting’ and was meant to help firms understand that accounting is not just about the numbers, but the value from those numbers.

Kasekende said, “One of the reasons why SMEs struggle to expand is the nature of these firms. The majority are owned by a single proprietor or family members. The governance of these firms, including financial governance, tends to be informal, without transparent rules, records and procedures. This type of informal governance may be adequate for small companies, but it is a major barrier to their growth and expansion.”

He said, “Firms cannot expand without mobilising capital for investment. Beyond a relatively small size, the investment needs of a firm outstrip the financial resources of a sole proprietor or a single family. Hence, finance must be mobilised from outside sources. However any investor or bank will only invest money in a company that has good record keeping accounts.”

Kasekende said the importance of the accountancy profession is well articulated within financial reporting, bringing value addition within business processes and the economy in general. “Organizations which scored below average at their first participation in the awards have demonstrated tremendous improvement in financial reporting with their subsequent participation over the years,” he said.

Protazio Begumisa the President of ICPAU said, “The FiRe awards have impacted participants in various ways. This is evidenced in increased funding for Non-Governmental Organizations, increase in shareholder numbers for listed entities, among others. Good financial reporting is undoubtedly a measure for business success.”