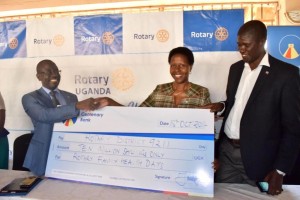 Byekwaso hands over the Centenary Bank donation to Dr. Edith Byanyima, a Board member of the RFHD and Rotarian Godfrey Ssebukulu

October 18—Centenary Bank has thrown its weight behind this year’s Rotary Family Health Days (RFHD), scheduled to be launched on October 21 at the Old Kampala SSS playground with a UGX10 million (about $2700) donation.

The Rotary fraternity in Uganda has partnered with Ministry of Health, Centenary Bank and KCCA to avail free medical care to local communities. A week later, the other Rotary clubs countrywide will set up similar medical camps to avail free health care at various health centers.This year’s theme is ‘Good Health, Happy Families’.

“I am grateful to all  our partners for the support we have received over the years. The communities we serve turn up in large numbers at all medical camps. We are optimistic that more partners will join us to scale up the initiative,’’ Stephen Mwanje, a Past District Governor said at the handover during mid-week.

Centenary Bank General Manager, Finance,  Godfrey Byekwaso said, “We chose to support activities related to cancer in the Rotary Family Health Days as part of our Corporate Social Responsibility dubbed ‘Bridging the Cancer gap’. We know that cancer is a silent killer yet early detection can protect life. Through various activities, we have made millions of people aware of this scourge and knowledgeable on how to prevent it, and this has seen some women get the desired treatment early.”

Centenary Bank is the largest indigenous-owned financial institution in Uganda after being licensed as a commercial bank almost 25 years ago.

Cervical cancer is one of the leading killer diseases in Uganda with about 3,915 new cases registered every year, according to the 2015 Human Papillomavirus (HPV) and Related Diseases Report.

Communities are encouraged to visit any medical camp nearest to them on these days to get both specialised and general services in the areas of cancer screening (cervical, breast, and prostate); Child immunization and nutrition; Family planning and maternal health; HIV/AIDs counseling and testing; Dental services (mainly examination and extraction); Optical services; Malaria testing and treatment; Safe male circumcision; Health education and Blood donation.

Byekwaso said, “This year we have set aside over UGX 230 million ($63,000) to ‘Bridging the Cancer gap’ activities of which UGX 40 million will go towards the purchase of cancer screening kits to be used during Rotary Family Health Days.”

The RFHD programme is implemented in six countries; Uganda, South Africa, India, Nigeria, Ghana and Tanzania. Since inception in 2011, the programme has reached out to an approximated two million people worldwide and over 500,000 in Uganda.

To cater for the demand in health services, two RFHDs are held annually; one in April and the other in October. The most recent event of April 2017 RFHD was able to serve a combined population of more than 75,000 people in Uganda. This time, the initiative targets 100,000 people.