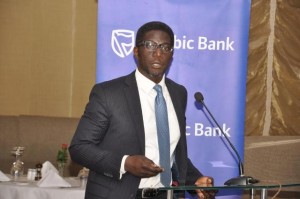 Kampala August 10- Stanbic’s Ugandan unit has announced a 57pc jump in half year profits off  top-line growth of 28pc, helping the bank maintain its position as the country’s largest lender.

The bank turned in a profit of Ushs 107.3 billion ($28.3m) off revenues of Ushs334.4 billion and 17pc rise in total assets to Ushs 4.5 trillion. Growth was positive across all indicators during the first half of the year, vindicating a strategy hinged on diversification and a weaning down from overreliance on interest income.

“We are very pleased with our performance and resilience demonstrated by our diverse businesses in the first half of the year. The strength of our diversified business model with multiple revenue streams and intrinsic operating leverage in the bank really came through with these results,” said Mr. Patrick Mweheire the Chief Executive.

Even with a flat loan book that grew only 1pc, the bank maintained its 31pc share of the market by profitability on the back of a 22pc increase in customer deposits and a credit loss ratio of only 1.6pc against an industry average of 7pc.

The results largely defy a first half during which growth in credit uptake remained sluggish, trending below GDP as the effects of prohibitive lending rates during the first quarter dampened appetite for credit. Many businesses were still struggling with the lag effects of sharp currency depreciation during the better half of 2015, high inflation and high lending rates that touched 30pc as well as a rise in domestic arrears as government defaulted on its commitments to suppliers.

“We started the year with a lot of pressure during Q1, there were high expectations that inflation would spike because of the elections and the Bank of Uganda moved aggressively to nip this in the bud. The inflation did not materialise but the sector comes out stronger as a result of these actions Mweheire said.

Growth in loans and advances was constrained mainly by a slowdown in the personal markets segment which experienced a 13pc drop YoY  and the banks own prudence that saw it pull the brakes on lending to this segment when interest rates  threatened to breach the 30pc mark.

“Am still very bullish about prospects for H2,” Mweheire said citing interim results that included provisions for exceptional items that will not recur during the second half while the Bank of Uganda’s progressive reduction in its CBR by 300basis points since April, a continuing downward trend in inflation towards the BoU’s 5pc target and a stable local unit against the greenback, promise a more vibrant business environment during H2.

diversified revenue streams and leveraging the bank’s funding and cost base through optimal deployment of liquidity and financing, actions that strengthened and protected the bank’s earnings.

He says as a result the bank witnessed a sprout in the growth of non-interest income which was achieved by investing in higher yielding AFS securities, good returns on investment of excess liquidity into the interbank market as well as higher yields from Loans and advances.

Despite the robust growth in return on equity, there will be no interim dividends for shareholders.