May 22–Bank of Uganda (BoU) will continue to reduce the Central Bank Rate (CBR), the lowest […] 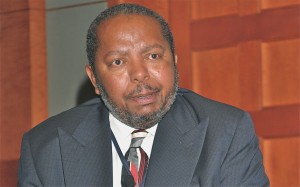 Mutebile wondered as usual why the banks are slow in dropping their prime lending rates.

May 22–Bank of Uganda (BoU) will continue to reduce the Central Bank Rate (CBR), the lowest rate of interest it charges commercial banks, if inflation remains within target levels during the months ahead. The CBR is currently at 11%.

Emmanuel Tumusiime Mutebile, the BoU Governor recently told a gathering of the Uganda Bankers Association during an informal dinner, “Given the relatively benign outlook for core inflation, I believe that we should have scope to implement further modest reductions in the CBR in the near term, although again I want to stress the caveat that any further reductions are contingent on there being no worsening of the core inflation forecast.”

In April this year, BoU reduced the CBR by 0.5 percentage points to 11%  from 11.5% in February.The latest figure for Headline inflation released in late April puts it at 6.8% while core inflation is running at 4.9% within the BoU’s target of 5%. “On the subject of inflation, our forecasts indicate that core inflation should be in line with our 5 percent policy target in 12 months’ time, which  is the time horizon for our monetary policy  decisions,” he said.

However as usual, Mutebile chastened the bankers for being slow in following the central bank’s lead, “I would like to re-emphasise my desire to see the reductions that we are effecting to the policy interest rate being passed through to bank borrowers.”

In December 2016, the CBR stood at 12% compared to 13% two months earlier in October, but commercial bank prime lending rates have stayed above 20%.

Critics say too many banks in sub-Saharan Africa are typically high cost operations and as a result, interest rate spreads and service fee levels are comparatively high compared to other regions around the world. Most local bankers insist however, the high cost of doing business, (including rents and utilities) in Uganda remains a weighty consideration before determining their lending rates.

This is why there was widespread relief when the law to oversee Agency Banking was finally passed after a four year wait. Under the new law, authorized agents can offer selected products and services on behalf of a bank. With Agency Banking banks can now revamp branch networks  and still maintain a presence.

“Like other sectors, the banking sector has been experiencing high costs of doing business amidst the tough economy, but with Agency Banking, we shall be able to see some cuts across the sector,” Patrick Mweheire, the Stanbic Bank Uganda Chief Executive said earlier this year.