August 3, 2018—FS6000 cargo scanners have been installed (one each) at Busia and Malaba main border points with Kenya to boost Uganda Revenue Authority’s (URA) capacity for non-intrusive inspection to speed up processing. 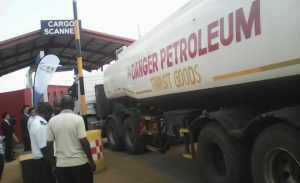 A fuel tanker goes through the scanner at Busia along the Kenya/Uganda border this week which cost nearly $2 million.

The FS6000 allows the driver to drive through the scanning tunnel directly at speeds up to 15 kilometres per hour and avoids scanning the driver cab automatically, which guarantees a fluent vehicle flow on site. President Yoweri Museveni has been an enthusiastic backer in the government purchase of the scanners which cost a total of UGX14.5 billion (nearly $4 million).

During a ceremony to officially launch the equipment at Busia One Stop Border Post, finance minister, Matia Ksaija said, “These scanners have an x-ray inspection system that allows officers  to see what is concealed or hidden. In the coming years, we want to improve these systems so that they are connected to a monitoring centre so that someone in Kampala can see and control it,” Kasaija said.

URA commissioner for customs, Dicksons Kateshumbwa said the scanners will ease the inspection and clearing of goods because one vehicle can go through the scanner in less than three minutes. He said the scanners are designed to handle over 200 trucks per hour.

He said, “This new system is part of our journey to modernise all our customs system so that we can facilitate seamless flow of goods and people at the borders.”

Use of scanning is expected to discourage people intent with ferrying illegal items in and out of the country as well as curbing smuggling.