April 12, 2018—One of the wealthiest people in Africa, Tony Elumelu, was in Kampala this week […]

April 12, 2018—One of the wealthiest people in Africa, Tony Elumelu, was in Kampala this week to add his voice to initiatives that actively support young entrepreneurship. 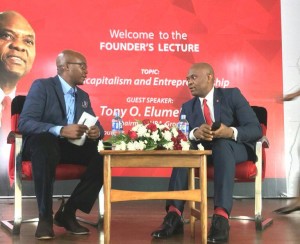 Elumelu (right) told his audience at Makerere University that  no matter how much capital you have, if you are not mentored, the business will never be successful.

Elumelu is the current chair at United Bank of Africa (UBA) and his net worth is said to about a billion US dollars.

Speaking at Makerere University, the founder of the Tony Elumelu Entrepreneurs Foundation (TEF) said, “The young entrepreneurs need to be mentored and trained on entrepreneurship. No matter how much capital you have, if you are not trained and mentored, the business will never be successful.”

Early in his years as an entrepreneur, Elumelu bought and made the Standard Trust Bank one of the leading financial institutions in Nigeria. Then in  2005 he led the acquisition of United Bank for Africa (UBA), later transforming it from a single-country bank to a pan-African institution with more than seven million customers in 19 African countries.

Following his retirement from UBA in 2010, Elumelu founded Heirs Holdings, which invests in the financial services, energy, real estate and hospitality, agribusiness, and healthcare sectors. In the same year, he established the Tony Elumelu Foundation, an Africa-based and African-funded philanthropic organisation.

In 2011, Heirs Holdings acquired a controlling interest in the Transnational Corporation of Nigeria Plc (Transcorp), a publicly quoted conglomerate that has business interests in the agribusiness, energy, and hospitality sectors. Elumelu was subsequently appointed chairman of the corporation.

Under the theme, ‘Africapitalisation and Entrepreneurship’, Elumelu said Uganda’s young business people needed to be mentored by qualified individuals and institutions if their enterprises are to survive the first couple of years.

Last year, the 55-year old businessman said, “Entrepreneurship is the cornerstone to African development and the key to local value creation in Africa. I am determined to ensure that Africa’s next generation of entrepreneurs have the platform they need to turn their entrepreneurial aspirations into sustainable businesses that will drive economic growth and job creation across Africa.”

In fully packed main hall, Elumelu said many Africans lack financial discipline hence the failure of almost 80% of their businesses. He said Uganda’s leading problem is duplication of business ideas. Entrepreneurs copy ideas from some else even though they have little understanding of the business concerned.

“You need financial discipline to have a successful enterprise. Learn to save as much as you can. For each dollar made, make sure you save half of it. Your saving and spending culture are very important” he said.

Since 2015, the Tony Elumelu Foundation Entrepreneurship (TEF) Programme is the largest African philanthropic initiative devoted to entrepreneurship and represents a 10-year, $100 million commitment, to identify and empower 10,000 African entrepreneurs, create a million jobs, and add $10 billion in revenues to Africa’s economy. TEF has been training 1000 entrepreneurs every year from across the African continent.