March 1—Barclays Africa Group (BAG), the banking business which Barclays Plc has been gradually shedding off […] 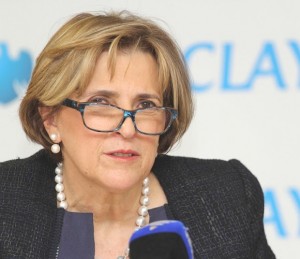 Ramos said they want to double African market share to 12% and lead in core business areas.

March 1—Barclays Africa Group (BAG), the banking business which Barclays Plc has been gradually shedding off to South Africa’s Absa since 2016, want to double market share across its African operations and re-brand as Absa Group Limited after reporting earnings of R15.6 billion (about $1.3 billion) for 2017.

The Group emerged after Absa Group Limited and Barclays’ African combined operations at the end of July 2013. Re-branding is to be done in phases, but must be completed by June 2020 when the Barclays blue will be replaced by the red signage of Absa.

Last year, Barclays Plc trimmed down its shareholding in BAG to 14.9% from just the over 60% two years ago. Barclays Bank Uganda is a subsidiary of BAG and this week the Kampala management relayed the full year results as announced by Maria Ramos, the BAG Chief Executive Officer in Johannesburg.

“These are our first results as an independent entity and therefore very important to us, because it marks a milestone,” Rakesh Jha, the Barclays Bank Uganda CEO told Ugandan media soon after.

In Johannesburg Ramos said, ‘Our overriding goal is to become a banking group of which Africa can be proud of, a forward-looking African business that recognizes our African heritage, rooted in Africa with global reach. We have a clear and undiluted ambition to double out market share of African banking revenues to 12%,” she said.

She said, “The sell-down gave us the opportunity to roll out a brand that reflects our identity in Africa and to unite our operations in 10 countries behind one name. We will be Absa, not as you know it, but re-launched, represented and with an identity fit for the new and forward-looking business we are creating.”

Jha said several months of intensive research had gone into the re-branding exercise in all the countries BAG operates and he stressed that apart from ownership everything else will largely stay the same. “Barclays celebrated 90 years in Uganda and this is our 91st. The Barclays brand is strong and well embedded in the Ugandan market. But after rebranding, it will still be the same people at the counter.”

Jha said digital banking is a core pillar in their future plans, but clarified that any future closure of branches would not be as a direct result of the re-branding, but a separate process altogether.

He declined to give details about the Uganda’s subsidiary’s full year results, until all regulatory criteria have been met, but conceded that the figures for2017, ‘are strong’.

Ultimately, Absa Group Limited wants to restore market-leading position in core business areas and also has plans to set up Absa Securities to handle international corporate and investment banking out of offices in London then later New York City.