April 26, 2018—The Uganda Bankers Association (UBA) has launched the Shared Agent Banking system that will […]

April 26, 2018—The Uganda Bankers Association (UBA) has launched the Shared Agent Banking system that will enable one agent to offer services for different banks and save money by reducing duplication of effort. 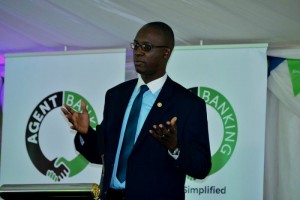 Speaking at the launch, Owor said the Shared Agent Banking platform will enable connectivity between the 24-member banks under the UBA.

Wilbrod Owor, the UBA Executive Director said at the launch that the new platform is a big milestone for the banking sector.  “We thought as an Association that instead of duplicating investments, if we worked together, we could address the important issue of service delivery. The banks hope to reach a bigger part of the population and extend financial services to the deepest levels,” he said.

This move is expected to boost financial inclusion and allow for deeper penetration of banking to Ugandans. Through Agent Banking, which is provided for under the newly amended Financial Institutions Act, banking services are extended outside the conventional bank branches, where a licensed and supervised third party operator (agent) is hired to provide permitted financial services on a given bank’s behalf.

A few banks in Uganda had started implementing this initiative which is hailed to be highly cost effective. However, the new Shared Agent Banking platform will enable connectivity between the 24-member banks under the UBA. This will enable them to serve customers of any of the banks.

UBA is working with a number of partners, including mobile telecom companies, most of whose Mobile Money agents will be providing the services.

The Wold Bank’s most recent (2017) Index Report shows that only six million Ugandans, which is about 33% of the country’s adult population, have a bank account. Under the shared agent banking platform, an additional 11 million new accounts are hoped to be brought on board.

Paul Mbugua, the Managing Director Eclectics International, the company which designed the shared banking system, said agents under this system will be providing services including cash withdraws, fund transfers, bill payments, among others.

They will also help customers open up bank accounts, (by collecting their data and sending it the bank branches, since only branches are permitted by the Central Bank to do the actual account opening); and also loans origination.

Customers he said, will be able to access these services using their smart phones, smart cards, and through other non-card systems.

Arthur Isiko, the Managing Director Bank of Africa, who also helped in developing the system, expressed optimism that the new service will go a long way in enhancing financial inclusion in the country. “All banks in Uganda combined, currently have about 580 branches and round 850 ATMs, which is clearly insufficient,” he said.

“A brick and mortar banking expansion will obviously impart more costs in delivering financial services, which is why this platform is necessary. It is an avenue that will deliver a cost effective service to the public,” Isiko said.

He said the new platform is expected to exponentially expand employment opportunities to Ugandans. Currently the banking sector employs about 12,000 people.

Under the shared platform, Owor said a total of 14,000 are expected to be hired as agents. He said the mobile telecom companies have already offered to avail 11,000 of their agents, who meet the Bank of Uganda criteria for becoming an agent.

Jacqueline Musiitwa, Executive Director Financial Sector Deepening (FSD) Uganda, which provided financial and logistical support to the new platform, said their organization is targeting to grow Uganda’s financial inclusion from 33% to 80% by the year 2022, and that Agent Bank will remove the biggest hindrance to achieving this milestone.