March 6—Africa faces a “severe learning crisis” that undermines economic growth and the well-being of its citizens, according to a new World Bank study launched in Dar es Salaam early this week. However this is not the first time the bank has raised concerns about the quality of African education despite numerous universal primary and secondary education programmes across the continent. A similar report was published last year. 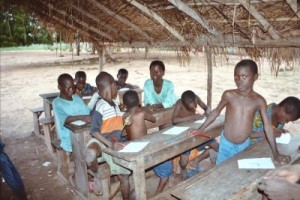 The ability for Africa’s young people to make a positive impact on their economies is being muted by the miserable circumstances of their learning.

‘Facing Forward: Schooling for Learning in Africa’ argues that learning levels across the region are alarmingly low. Among second (Primary 2) grade students assessed on numeracy tests in several sub-Saharan African countries, three-quarters could not count beyond 80 and 40% could not do a one-digit addition problem.

In reading, between 50% and 80% of children in second grade could not answer a single question based on a short passage they had read, and a large proportion could not read even a single word.

According to the study, in 2014, African governments spent an estimated $204 per student for primary education—less than half of the amount spent in South Asia, the region with the next lowest level of spending. But the authors caution that more spending needs to be complemented by smarter and more strategic spending on learning materials, infrastructure, and teacher training.

According to the report, progress in the region has been mixed and some countries, including South Africa and Zimbabwe, have universalized access to basic education (primary and lower secondary). Other countries, including Central African Republic, Liberia and Chad, which have been affected by conflict and political turmoil, are lagging behind even in primary school access. In most countries, however, despite rapid advances, richer children, urban children and boys have the highest access to lower secondary education.

Jaime Saavedra, the World Bank’s Senior Director for Education said, “Providing a high-quality basic education for children across the region is an economic necessity, as well as a moral imperative,”This report provides a sobering look at Africa’s learning crisis and the region’s potential to solve it. Young Africans can transform the region and create lasting economic change, but they need to be equipped with the skills and human capital to do so.”

Specifically, the report urges countries to focus on student progression and the ‘traffic jam’ in early grades, where children are stuck for many years with little learning, and are often taught in a language they don’t fully understand. Ensuring regular student attendance, reducing repetition and class size, and implementing a language of instruction policy are factors critical to ensuring foundational learning. The study also calls for the elimination of the high-stakes examinations between primary and lower secondary school to ensure student progression.

Sajitha Bashir,  the World Bank Education Manager and co-author of the report, along with Marlaine Lockheed, Elizabeth Ninan, and Jee-Peng Tan said, “Countries in Africa can address this learning crisis while also improving access and completion,”   “Our research draws on lessons from the region and for the region about what works. Countries need to design policies that fit their local context and educational needs, while building their capacity to implement dynamic programs that are open to improvement and feedback.”

The study complements the World Bank’s recent World Development Report 2018: Learning to Realize Education’s Promise, which was released in September 2017.