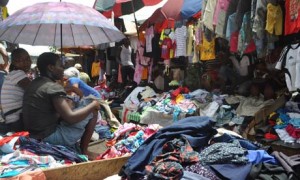 Millions of people across East Africa depend on the mitumbo business to make ends meet.

May 18— A report on the textile and leather sectors with a view of phasing out imports of used textiles and footwear in the East African Community (EAC) Common market could end up being largely ignored when the regional presidents meet in Dar es Salaam this weekend. Resistance to the proposal remains widespread.

The 18th Ordinary East African Community (EAC) Heads of State Summit has been set for May 20, but. Kenya has already developed cold feet over an outright ban on mitumba imports. Member states of the EAC include Burundi, Kenya, Rwanda, South Sudan, Tanzania and Uganda.

Last year the EAC leaders mooted intentions for a phased approach (higher taxes), culminating in an outright regional ban by 2019 with the long term plan of reviving domestic capacity. Most of  the EAC member countries are involved in mass public campaigns intended to raise manufacturing and industry output by encouraging people to buy local products, but mitumba is a sensitive issue.

The regional garment industry is all but gone due to an avalanche of imported cheap, but fashionable used clothing and footwear. From being a charitable initiative in the 1980s, these clothes have become the centre of a multi-billion dollar business employing several millions across East Africa. Its unlikely any of the EAC leaders is ready to pay the political price of denying their citizens a right to make a living especially against a background of few formal sector jobs.

Speaking recently in China, Kenya’s industrialisation secretary, Adan Mohamed said,  “Through the transition of market forces, we would like mitumba clothes to compete with clothes that are produced within East Africa, within Kenya, and if those products are much more competitive and much more consumer friendly, then of course you will see a reduction in the mitumba business in our country. But it is not going to be through a ban or anything of that nature.”

He was echoing a view frequently expressed whenever the topic arises. Hosting members of the East African Legislative Assembly last year, Amelia Kyambadde Uganda’s trade and industry minister said, “Uganda has decided to go slow on the ban on used clothes. The ban on secondhand clothes will be a gradual process as Uganda develops her textile and leather industries. Secondhand clothes provide employment to many Ugandans. It is also affordable and readily available.”

The situation is not dissimilar in Rwanda or Tanzania, but new investment by Chinese firms using locally sourced cotton to create vertical linkages on a large scale may tip things the other way.

According to the Arusha-based EAC Secretariat, another contentious point on the agenda is the consideration of European Union-EAC Economic Partnership Agreement (EPA). A final conclusion to whether the bloc will sign the EPA remains illusive, because Tanzania is still not yet convinced of the advantages.  Related to this, is a new agreement on a Sustainable Financing Mechanism for the Community with regard to defining ‘contributing a fair share’ to the running of the Secretariat.

The Summit will also receive a report on the road-map for the accelerated integration of South Sudan into the EAC, and consider progress report on the implementation framework for the EAC Institutional Review.

Also on the agenda are a progress report on the ratification exercise for the admission of the Republic of Somalia into the EAC; a report on the modalities for promotion of motor vehicle assembly in the region and to reduce the importation of used motor vehicles from outside the Community.

The Summit will consider assenting to Bills passed by the East African Legislative Assembly and will also present awards to the winners of the EAC Students Essay, 2016. The Summit will also declare the transformation of the EAC into a Common Higher Education Area.