September 19—The government has signed a Production Sharing Agreement (PSA) and issued a license for Petroleum Exploration, Development and Production for the Kanywataba Contract Area with Australian company, Armour Energy Limited (AEL). 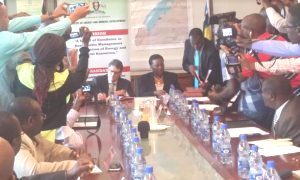 Armour is getting nearly 350 square kilometres on which to explore and possibly drill for oil.

“We have awarded AEL an exploration license with an acreage of 344 square kilometres for four years split into two periods of two years each and a minimum work programme which includes acquisition of seismic data and drilling of at least one well,” Eng. Irene Muloni, the energy and mineral development minister said late last week..

Speaking during the ceremony held at the Ministry headquarters, she said the PSA was the first to be signed in line with Section 58 of the Petroleum Exploration, Development and Production Act 2013, the legal framework under which she announced the First Competitive Licensing Round during February 2015.

“In addition, an Advisory Committee chaired by the Petroleum Authority of Uganda (PAU), and consisting of representatives from Government and the Licensee has been set to review and approve all annual exploration work programmes, budgets and production forecasts,” she said.

Robert Kasande,  the acting Permanent Secretary said one of the major achievements from this licensing round was the development of a state-of-the-art data room which is open to all interested parties to view and purchase data, and will also be used for future licensing rounds.

“The Ministry was able to generate $2.4 million from the sale of data to bidders which was paid to the Uganda Petroleum Fund,” he said.

Eng. Muloni said Cabinet approved the award of two licenses in the Ngassa block and that the agreements would also be signed in a few weeks’ time.

Uganda’s first licensing round covered six blocks with a total acreage of 2,674 Km2 in the Albertine Graben, Uganda’s most prospective sedimentary basin.

This first licensing round was undertaken in line with the National Oil and Gas Policy for Uganda (2008) and in accordance with the Petroleum (Exploration, Development and Production) Act 2013.