Another fund set up to protect Great Lakes

May 8– Uganda is to benefit from the $500,000 African Great Lakes Conservation Fund which was […] 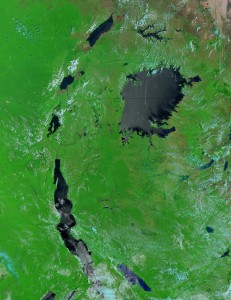 As seen from space, the Great Lakes rank as one of Africa’s most vital factors for socio-economic well-being.

May 8– Uganda is to benefit from the $500,000 African Great Lakes Conservation Fund which was recently launched as a trans-boundary initiative to protect the natural beauty associated with such lakes as Lake Malawi, Lake Tanganyika and Lake Victoria, together with the smaller Lake Kivu, Lake George and Lake Edward.

“To succeed in addressing these issues, we urgently need collaborative planning across national borders and sharing data and best practices among ourselves,” Dr Modesta Medard, the African Great Lakes Regional Manager for The Nature Conservancy, a global conservation organization said.

Dr. Medard was speaking at the African Great Lakes conference hosted by the Uganda government and involving each of the 11 nations in the African Great Lakes Region: Burundi, Democratic Republic of Congo, Ethiopia, Kenya, Malawi, Mozambique, Rwanda, South Sudan, Tanzania, Uganda and Zambia and held under the theme, ‘Conservation and Development in a Changing Climate’.

The money is for sustainable development projects that protect the environment of Africa’s Great Lakes while also driving economic development among the 50 million people who rely on these fresh water bodies.

Although the region holds nearly one-third of the world’s fresh surface water and is rich in freshwater and terrestrial biodiversity, it also faces high population growth rates, extreme poverty, and rapid unplanned development, all of which are driving related environmental impacts.

According to experts, increasing population has led to widespread deforestation for fuel and timber, and increased agricultural land use leading to accelerated erosion, sedimentation and nutrient loading. There is also increased pressure on the domestic water supply and increased discharge of waste and pollutants into the lakes.