May 25, 2018—The leafy Nairobi suburb of Karen, the residential address for such Kenyan luminaries as […]

May 25, 2018—The leafy Nairobi suburb of Karen, the residential address for such Kenyan luminaries as William Ruto, Raila Odinga and a host of the wealthy clique, has received a mention in the latest Knight Frank Wealth Report. 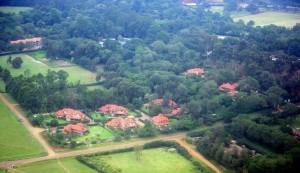 According to Ben Woodhams of Knight Frank Kenya, “From the early 2000s, growth was rapid, with many of the original five- and ten-acre plots developing into modern housing clusters with shared amenities such as club houses, gyms and swimming pools.

“This period saw land prices soar from KES2.3 million shillings per acre to their current levels of over KES50 million shillings ($494,000) per acre, where they have now stabilised.”  This is equivalent to UGX1.8 billion in Uganda currency for those with the spare cash.

Karen lies about 16 kilometres west of the CBD and was named after Karen Blixen, the Danish expatriate who lived here in the early 20th century and famously wrote about her experiences in the book Out of Africa. It was subsequently made into an Oscar-winning film which was filmed on location in Kenya.

Woodhams said, “The market for these townhouses has become somewhat saturated, with a subsequent plateauing of both house prices and land values, with the former selling for typically around KES80 million ($790,000) to KES110 million ($1 million) although we are now seeing record prices being achieved for larger stand-alone houses with more substantial gardens.”