August 16, 2018—Air Tanzania will make a return to Entebbe International Airport (EIA) after an absence […] 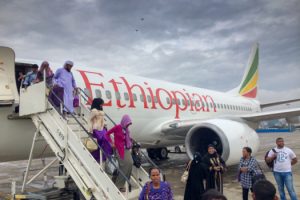 According to latest figures from the Uganda Civil Aviation Authority (CAA) last year Entebbe handled 1.53 million passengers, up 8.1% compared to 2016. This is the first time ever that EIA has handled over one and a half million passengers.

However while Dar es Salaam and Kilimanjaro will be new destinations for 2018, MIDT data shows that London Heathrow is the more desired destination, with nearly 60,000 passengers travelling indirectly between the UK airport and Entebbe in 2017.

The leading airlines for traffic on the route last year were Emirates and Brussels Airlines, with both capturing 20 pc of the market. Kenya Airways was third, capturing 19 pc of passengers via Nairobi.

EIA grew past one million passengers for the first time in 2010 according to CAA data. Of the airport’s total traffic last year, 99% flew on international services, with only 18,824 domestic passengers using the terminal in 2017. The only airlines offering domestic services from Entebbe are Eagle Air and Aerolink Uganda.

Industry watcher anna.aero says Ethiopian Airlines is the largest operator at Entebbe, offering just under 140,000 departing seats from the Ugandan airport between June and August. However, it should be noted that 13,000 of these seats are made up of the airline’s tag-on connection from Addis Ababa to Goma which operates via Entebbe, with the Star Alliance member not having traffic rights between Uganda and the Democratic Republic of Congo according to the airline’s booking engine.

Along with Addis Ababa, Ethiopian Airlines also flies from Entebbe to Juba in South Sudan, a route for which it does have traffic rights, and operates daily this summer using Q400s. One airline which is new to the top 10 is Jambojet (highlighted in light green), with the Kenyan low-cost airline having begun flights to Entebbe from Nairobi on February 15. It presently offers a twice-daily Q400-operated service between the two airports.

When placing Entebbe’s monthly passenger statistics for 2017 into anna.aero’s Seasonal Variation In demand (SVID) calculator, the airport does well, generating a score of 1.07 – an ‘Excellent’ rating. The busiest month for the airport last year was December, with 147,590 passengers travelling through the terminal, while the quietest month was February with 107,174 passengers.

Use of EIA is also expected to be less frustrating following completion of the $470 million Kampala-Entebbe Expressway that has significantly eased travel time between the airport and the capital, a distance of 51 kilometres.