August 23—With less than 10% of the national budget, going directly to agriculture, the so-called mainstay […]

August 23—With less than 10% of the national budget, going directly to agriculture, the so-called mainstay of the Uganda economy continues to plow modest productivity figures, but the government insists the biggest problem is a slow shift from subsistence to large scale commercial farming and modern methods. 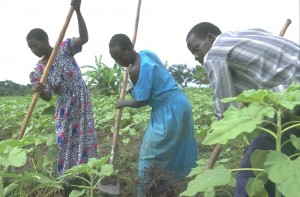 Most of the time it is not the farmers don’t want to use better methods, but because they cannot afford to.

Recently, Joy Kabatsi, the Minister of State for Agriculture held a news conference to pass on the message that rice and potatoes are in demand and farmers should get planting. In the current financial year 2017/18 agriculture was allocated just under 4% of the total budget of some $8 billion.

“I encourage our farmers in the Western and  Eastern Uganda to take on planting rice and potatoes, because they can yield maximum profit; all you have to do is have good quality seeds, use fertilizers and practice good farming methods,” Kabatsi said.

This may prove easier said than done. According to the Economic Policy Research Centre, only 25% of farmers use fertilizer, 85% plant local seed, only 6.5% combine fertilizers and improved seeds while just 1% practice irrigation. In other words, many cannot financially afford to become better farmers. However the government is not giving up although it was noted by Matia Kasaija, finance minister last June, there is also a lack of coordination among institutions in the agricultural sector.

Kabatsi was launching ‘the crop intensifying advocacy messages’ intended to trigger good farming practices, efficient use of agro-inputs in a stepwise manner, given that farmers may not have money to acquire all the recommended inputs at once. Kabatsi also spoke on post-harvest handling of crops and marketing of produce.

The experts say productivity for most crops has been reducing over the last decade mainly due to poor production techniques, limited extension services, over dependency on rain-fed agriculture, high costs of inputs, poor quality seeds and counterfeit inputs on the market, limited markets, land tenure challenges and limited application of technology and innovation.

Agriculture is one of the major sectors of Ugandan economy; employing 65.6% (as determined by the statistics bureau seven years ago) of the labour force and contributing 21% to the GDP. In addition, agricultural sector exports have increased over the years. By 2014, agriculture contributed $1.26 billion in export earnings. Meanwhile, tourism brought in about the same amount of cash, but involving far less physical effort on the part of Ugandans.

In the 2015 Africa Competitiveness Report it was shown that the level of value-addition and crop processing of agricultural commodities is low and post-harvest losses in sub-Saharan Africa average 30% of total production, meaning that the region loses over $4 billion each year.

The slow productivity growth in agriculture is also constraining Africa’s structural transformation process and economic diversification. As reported in several studies on structural transformation, reliance on subsistence production and weak productivity growth in the agriculture sector prevents the workforce from moving out of this sector into manufacturing and services.

Globally, countries that have developed successfully are those that have shifted their resources from agriculture to manufacturing. However,  this is not the case for Africa, where labor tends to move more into services, in particular trade, rather than into the manufacturing sector. Given the low productivity in services and the prominence of the informal service sector, this current pattern of structural transformation will not yield sustainable income growth for the majority of people nor will it lead to economic development. Inclusive growth and higher income for the majority requires higher productivity in labor-intensive sectors, including agriculture