AGOA proves no such thing as free things

August 25—The African Growth and Opportunity Act (AGOA) gives eligible African countries access to the United States market on a duty/quota free basis, but there are strings attached. 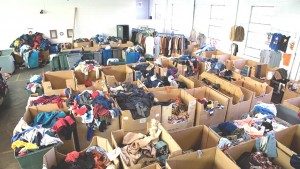 A  US sorting centre before everything is classified, packed and shipped off to Africa.

Some of the strings are very sensitive to the Americans like improving human rights, labour standards and political pluralism. It has been nearly two years since Burundi was struck off the AGOA list, because Pierre Nkurunziza declined to give up the presidency.

At the moment, Rwanda, Tanzania and Uganda are not in the good books either. The three governments have voiced intentions of phasing out imports of second hand clothing and footwear to encourage domestic capacity.

This has alarmed American mitumba exporters under the umbrella of the Secondary Materials and Recycled Textiles Association (SMART). In mid-2016, SMART loudly complained to the Office of the United States Trade Representative (USTR) saying this was against all the dictates of free trade and the three countries must be removed from the list.

SMART claims $125 million in annual sales is at stake, but most importantly, (so they say), it would be a big shame to see millions of Rwandans, Tanzanians and Ugandans, walking around buck naked.

In July this year, USTR hosted a back and forth public session on whether President Donald Trump should be ultimately advised to drop the three countries. Right now, USTR is weighing all the positions, both for and against, in what is technically known as an out-of-cycle review before making final recommendations to the White House.

Should Rwanda, Tanzania and Uganda be worried? If it is a matter of losing face then certainly yes.

On the other hand, why worry if you have the best interests of your people at heart? East Africans have the potential to grow plenty of cotton and make their own clothes. Why continue to rely on hand-me downs and giving the value-addition to someone else? Isn’t it odd countries such as Kenya send new garments to the US worth $300 million annually and then spend half of that money on importing used clothing?

To be fair, several other American companies in this second hand clothing business feel that SMART is not being smart at all. There was room for compromise before, but now, some ill-feeling has set in and people like Rwanda’s Paul Kagame do not take kindly to bullying.

The fact is, Rwanda, Tanzania and Uganda have little to lose if scrapped off the eligibility list. Unlike Kenya, the volume of exports to the US from the three countries is negligible. According to USTR figures, there are years since 2000 (when AGOA was signed into law), when Rwanda and Uganda for example, notched up zero exports to the US under AGOA provisions.

The overall African picture is not much better. Last week, the International Centre for Trade and Sustainable Development (ICTSD) reported that during the last decade, trade between AGOA-eligible African countries and the US has declined significantly, from a peak of $100 billion aggregated two-way trade in 2008 to $32 billion in 2016.

During the same period, exports from AGOA-eligible countries to the US have decreased from $82 billion to $20 billion. ICTSD says this collapse is mainly due to the decrease in oil imports from AGOA countries such as Nigeria, Angola, or Chad, as US domestic production of shale oil has dramatically increased over the past decade, with oil’s share in total African exports under AGOA falling from 89% to 58% between 2008 and 2016.

The oil sector has historically constituted the bulk of African exports to the US under AGOA. A few other sectors, however, have also benefitted from the scheme, and have shown timid but encouraging export growth during the last three years, including transportation equipment, apparel, and metals. As far as non-energy products are concerned, South Africa (who exports Mercedes and BMW cars) alone accounts for more than half of all exports under AGOA.

Trump came into office singing ‘America First’. That has put a damper on all things trade, including AGOA. True, sub-Saharan Africa has been assured in so many words that it is a special case, but nothing is guaranteed. We are dealing with a US President who baffles by the minute and who has trampled on everything to do with status quo.

At the recently concluded AGOA Forum in Lome, Togo, Robert Lighthizer, the US Trade Representative said, “Bilateral trade that benefits both US and African exporters and service providers lies at the core of our Africa trade policy. I encourage our AGOA partners to promote fair trade, foster an improved business environment, and create economic opportunity that lays the groundwork for the next stage in the US-Africa trade relationship.”

Note the word ‘bilateral’ when basically AGOA is a ‘multilateral’ scheme. In the near future, Africa will become a free-trade area and this is where real opportunity lies. It is sad that after 50 years, we hardly know each other, because all trade was skewed outwards, beyond the continent. It is time to reverse this trend or remain a dumping ground for others.

From the very beginning AGOA had major disadvantages that many African governments either underestimated or ignored altogether. There was a good reason why Europe predominantly remains Africa’s leading trading partner.

The United States is at the other end of the world. Direct flights, are few, so logistics costs were bound to be a huge headache. The US market is not only sophisticated, but also cut-throat and driven by equally high marketing/advertising costs. Finally, there is very little that the Americans were really interested in buying from Africa except oil and gas. Although very tasty, even Uganda’s bananas could not have found a way pass the powerful fruit companies who source their supplies from South America.

Without a strong, well established American partner, any gains from AGOA were going to be limited. To argue this point is to forget a simple rule in business; there is no such thing as free things.