After success in Kalangala, Uganda bids to spread oil-palm growing 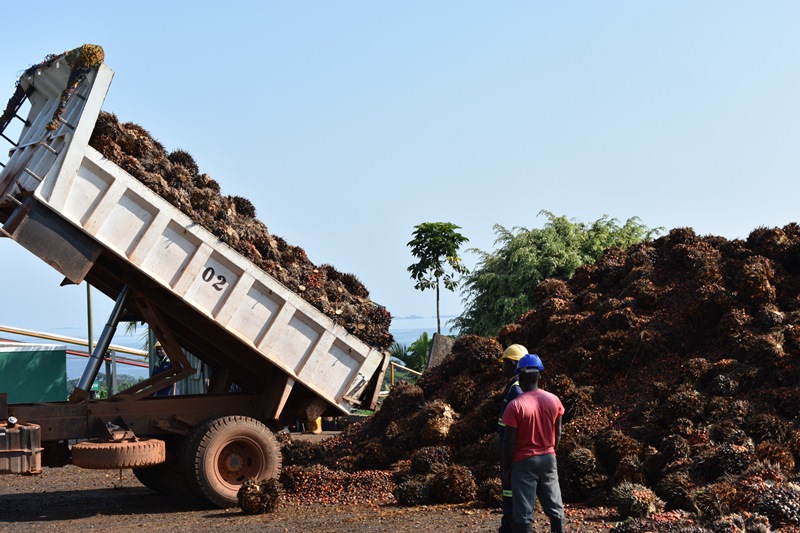 When oil palm was first introduced in Uganda’s Kalangala district in 2004, potential growers where told […]

When oil palm was first introduced in Uganda’s Kalangala district in 2004, potential growers where told driving would come within their reach. It is an aspiration many are yet to realise but there are also many who are living the dream.

Dusting the Land Rover Freelander parked inside the cramped garage of his newly built permanent house, James Lutaya 68, an oil palm grower in Busanga village, Bugoye sub-county in Kalangala district, reflects on life before and after he took to growing the exotic crop. Across the road from his new perch, he looks at his old dwelling, now converted into rental shops and tells his guests, “I cannot count the blessings from growing oil palm.” 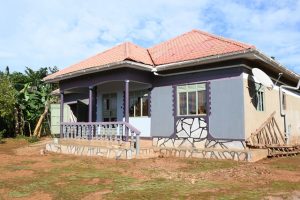 The house Lutaya has built from proceeds of oil palm

The vehicle, bought on Uganda’s second-hand market, is the latest symbol of self-actualisation for Lutaya. Like almost everyone in central Uganda, the father of nine previously depended on coffee for income. But an invasion of coffee wilt disease towards the end of the 80’s, sent his fortunes tumbling. When officials from the International Fund for Agricultural Development IFAD, came looking for farmers who could pilot growing of oil palm on Bugala island in 1994, Lutaya seized the opportunity. He planted half an acre. A decade later, the Uganda government signed an agreement with Oil Palm Uganda Limited (OPUL), a joint venture between Kenya’s Bidco Oil and Singapore based Wilmar International, to launch commercial oil palm growing on Bugala, the largest of the 88 islands in the Sesse isles.

Today, Lutaya is the leader of a 500-member oil palm growers’ cluster. He has planted 55 acres of the crop, 30 of which he shared out between his wife and 9 children to avoid future conflict over wealth. From his share of 25 acres, he harvests between 3 and 5 tons every ten days, which translates into about $3500 a month at current price that OPUL is paying for raw palm seed. 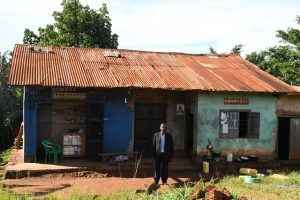 According to David Balilonda, the general manager of Kalangala Oil Palm Growers Trust (KOPGT), that coordinates marketing of the crop to OPUL, the project was conceived in 1989, soon after the isles gained district status. With a mostly poor resident population of just 11,000, the project sought to uplift the economic status of the island community by involving small holder farmers. It would also give the local administration a source of revenue. At the national level, it would help Uganda substitute part of the 0.55 million metric tons of crude palm oil that is imported every year.

Government planned to expand the project to 51 districts with a commitment to have 40,000 hectares of land under oil palm. So far, it has succeeded in raising only 11,800ha on Bugala island. Of this OPUL owns 6000ha on its nucleus estate while smallholder farmers hold the rest.  Through KOPGT, the government bought 10 percent of the stock in OPUL for the smallholders. The venture broke even in 2017 and started paying dividends a year later. By December 2020, the farmers had cumulatively earned UGX 17.5 billion in dividends from their shares in OPUL.

Sixteen years after first planting, oil palm is a hot crop and now there is a scramble for land on Bugala island. The project has also transformed the island, bringing social services such as piped water, electricity, motorable roads and predictable water transport. A ferry shuttle operated by Kalangala Infrastructure Services on behalf of the government departs on the top of every hour from either end, for a total of six to eight trips per day. The MV Kalangala, another ferry makes the 3-hour crossing from Lutoboka on Bugala, to Entebbe daily.

The infrastructure set up to support the project has had spinoffs for the hospitality with Kalangala now boasting a decent number of quality hotel beds. From just 11,000 people at the start, today, Kalangala is booming with a population of nearly 65,000 people. The number of permanent houses is also growing exponentially.

Uganda which currently consumers 0.55 million tons of palm oil annually, has so far achieved substitution of nearly 9 percent of its annual vegetable oil imports. That output is coming from 11800ha of plantation, 5800ha of which is owned by smallholder farmers. Besides earning dividends from their 10pecent stake in OPUL, farmers also earn regular income from sales of oil palm seed to the processing plant.

First conceived during the 1970’s oil palm growing in Ugandan only gained traction after OPUL came on board in 2003, under a $100 million project sponsored by the International Fund for Agricultural Development IFAD.

Sardin Damanik, OPUL’s general manager says the company injects UGX 2 billion on average, every month into the local economy. Farmers who follow best practices in plantation management can achieve yields of 24metric tons per hectare. At an average farmgate price of Ushs650 per kilogram of seed, that translates into an annual income of Ushs 14.4 million.

A perennial crop, the oil palm tree begins fruiting four years after planting. From that point, the farmer earns regular income every ten days for the next 21-30 years.  OPUL supports farmers with credit for opening up the land, seedlings and all inputs and labour from planting until harvest. The money is advanced through the growers’ trust and recovered at a rate of 33 percent per sale when harvesting starts. A portion of the proceeds is also kept into a savings account, helping to develop a savings culture among farmers.

James Lutaya says oil palm is a great crop because it does not demand much time once the plantation is up. That leaves one time to engage in other productive activities. Yields, he says depend on individual discipline and the attention one pays to the plants

“We are taught that the oil palm tree has the memory of an elephant. If you treat it well at the beginning, it will reward you well in the future. Farmers who follow best practices are making good money out of this crop,” he says. 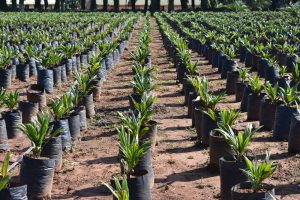 After registering success in Kalangala, the government wants to replicate the project in other poverty-stricken communities in the Lake Victoria Basin. According to Ms Connie Magomu Masaba, the Coordinator of the National Oil Palm Project, there are plans to open new plantations in Buvuma where 900ha of a planned 5000ha plantation has been planted since January. Other areas are Mayuge, greater Masaka and Sango bay, in Southern Uganda. OPUL will inject USD 70 million in the Buvuma project.

“The major social impact of oil palm on communities is not the amount of money it gives farmers but the regularity of income. With that, one is able to plan and achieve some savings, which is not possible with many other crops,” says Masaba.

That resonates with Nansamba Jane, a mother of seven who has been growing oil palm from her 2-acre plantation for eleven years. “Our initial expectations were very high because we were told that in Malaysia, even, growers with just one acre, can afford cars. But a major benefit for me is access to credit which has allowed me to diversify my income sources,” she says.

Her first harvest yielded only 8kg of seed. Today, she harvests 3 tons a month on average which earns her UGX 850,000 net in monthly earnings. From her income, she has been able to take her children to school, and to treat her goiter. She has also been able to diversify her income base by investing in fishing and rentals.

The yield from smallholder plantation averages just 10tons per hectare annually because of financial constraints and sometimes lack of fidelity to procedures.  For instance, each palm requires 10kg of fertiliser per year but some farmers apply as low as just half a kilogram per plant. The price of fertiliser varies from USD 140 to 450 per ton. An acrea requires 0.58 tons annually.

Expanding the crop area is an imperative because under its agreement with OPUL, the government was supposed to make 40,000ha available for planting palm. So far less than half has been provided. OPUL’s Damanik says Uganda would need 100,000ha under palm if it was to fully substitute her oil palm imports at current consumption rates. He adds that such production can only be achieved through oil palm because of its higher yield of oil compared to other crops, which would require ten times the land occupied by palm oil.

Sunflower can distribute income to more people than oil palm. But it yields only 0.5 ton per hectare, cannot be grown on marginal land besides multiplying land requirements by a factor of ten.

Balilonda says progress has been slow because of activism by international NGO’s who accused the project of cutting down natural forests and dispossessing poor people of their land. He dismisses the accusations, saying 70 percent of the project was developed on marginal land such as grasslands and rocky outcrops which have now been turned productive. The marginal land was allocated to OPUL because it involved higher capital costs to develop, which could not be managed by the locals.  The other 30 percent is on privately owned land whose owners cut down trees to open land to palm.  Land acquisition was also slow because owners had to be compensated, he said. 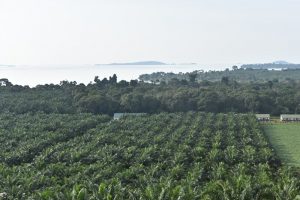 Concerns over land, fueled by activists, are partly responsible for the slow spread of the crop to other districts.  When the proposal was put to them at the start in 2004, many local leaders argued against the project thinking their land would be appropriated.

Even in Kalangala, smallholders were skeptical at first. They only began to embrace the project after they saw the early adopters reaping money.

“Oil palm is superior to sugarcane and other seasonal crops,” says Balilonda. Once planted, the farmer will harvest continuously every ten days for 25 years. The fields are replanted after that period because the trees would be too tall for easy harvesting and yields are lower by that time.

Damanik says the government still owes OPUL more land. “We are still demanding for more land.” He says the project started on islands first, because with lower populations, land was easier to acquire and the isles have plentiful and more stable rainfall.

Damanik is impatient with the slow pace. The project was supposed to expand to the Buvuma islands in 2012.  But activism put off community and OPUL which had already mobilized equipment had to pull out and take transfer the investment to Nigeria where 15700hectares has been planted since 2013.

“Isn’t incredible that Nigeria which started 8 years after Uganda and is now ahead?” Damanik complains.

The company needs a minimum of 5000hectares of land in any area where plantations will be opened, because that is the basic unit of plantation to support an extraction plant. Kalangala, where acreage is approaching 12,000 hectares, has two extraction mills now.

In 2020, each smallholder earned UGX 20.2million on average but individual take-home is a function of acreage and productivity of the plantation.

Lutaya says there has been no environmental impact attributable to oil palm growing. “We don’t see any change in rainfall patterns that we could say is because we replaced natural forest with oil palm,” he says adding that in the past, the islands forestry resources were being harvest by people from outside the islands.

Some private land owners cut down natural forest to plant palm but the government enforces a 200 metre buffer zone from the lake shores, which has saved a significant acreage of forest on the island.

“The increase in local now supports other commercial activities because there is now money in the island. Our children study on the mainland. In fact, while I still grow some coffee, I know longer factor proceeds from coffee sales into my income projections,” Lutaya says.