African cement magnate notches up a first in New York 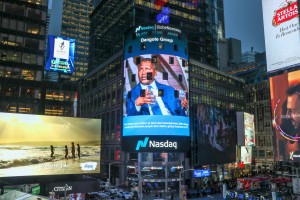 He was named as the only African on the Bloomberg 50 list of this year’s most influential people.

December 8—Aliko Dangote, who owns sub-Saharan Africa’s biggest cement maker, Dangote Cement, made history this week after being named the only African on the Bloomberg 50 list of this year’s most influential people.

A photo of Aliko Dangote was displayed on the Nasdaq Tower in Times Square, New York City, an iconic site for all things big business in the United States’ financial capital.

In mid-November, the Nigerian billionaire, whose personal net worth is in the region of $15 billion, promised to invest $100 million over five years to tackle malnutrition in Nigeria’s worst affected regions. A week later, he was the Republic of Congo to join President Denis Sassou Nguesso, to officially open a new 1.5 million metric tonnes per annum plant. This will more than double the total cement production capacity of that country, which now stands at 2.550 million metric tonnes per annum, far in excess of national demand.

Dangote Cement is a public-traded company and the jewel in the Dangote Group which evolved from by trading in commodities like sugar, rice, pasta, salt, cotton, millet, cocoa, textile and vegetable oil before Aliko Dangote got his breakthrough after being awarded a license to import cement. Today his factories are all over the continent.

Dangote Cement total production capacity across Africa at the end of May 2017, stood at 45.8 million metric tonnes per annum, making it one of the biggest cement producers on the continent. Aliko Dangote has stated an ambition to rank among the top 10 cement producers in the world by 2020. Apart from Congo, recent plant openings have taken place in Ethiopia, Zambia, Cameroun and Tanzania.

The NASDAQ Tower is considered the most visible LED video display in Times Square and is one of the most valuable advertising spaces in the world. It’s the largest continuous sign in Times Square. It has close to 9,000 square feet of display space — about a quarter of an acre.