Home » Slider » A Harp, a chef and the surprise offerings at Hamilton Recreation Park 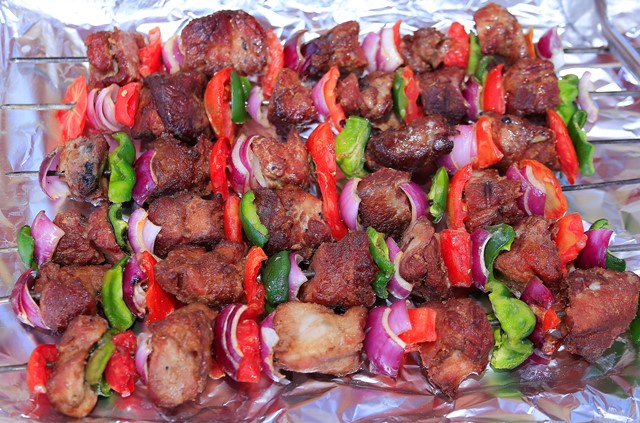 It is easy to miss The HARP – Hamilton Recreation Park. Staring right at you as […]

It is easy to miss The HARP – Hamilton Recreation Park. Staring right at you as you drive along the Lusirika-Kironde road -that stretch of murram which links Mamerito road in Kira to the Namugongo- Ssonde-Seeta road- it is easy to mistake the HARP for something else. Located within the wider Namugongo religious circuit, I had driven by this place a number of times in the past, mistaking it for a home to some religious order. That is until recently, when the misfortune of a flat tyre visited me, and the HARP happened to be the only place where I could ask for water to clean up after swapping.

The surprise on my face must have been palpable to the lady who welcomed me. This was a place not just to clean up but was an inviting set-up complete with all the gastronomical temptations. If I was up to it, I could even take a full body shower. On seeing what was on offer, I without betraying my earlier intentions, effortlessly morphed from hapless stranger to customer, the welcoming staff guiding me to one of the airy lounges where I cleaned up. I then scanned the menu, before placing my order from a selection of delectable roasts that included chicken, goat and pork.

It was rather busy for a weekday. A group of what looked like corporates out for a retreat were busy in the basketball court, children and adults were out for a swim in the sizeable pool, while a handful of lone souls like me sat, just enjoying the tranquil surroundings while nursing a cold lager.

Because my initial mission had been to join a group of friends for a session of pork at one of those makeshift affairs in Namugongo, I ordered for 4 skewers of pork. Which turned out to be a good mistake for my family. The portions here are so generous, the cubes of meat so chunky that I could not eat all of my order. But again, it would look odd taking a skewer-and-half of roast pork to the loved ones at home; I topped-up my order with another 4 skewers, to conceal the fact that the folks back home were actually an afterthought!

The pork was not only well-seasoned and delicious, it was so tender, thanks to careful marinating by the chef. Weeks later, I have had to find numerous excuses for not taking the family over. 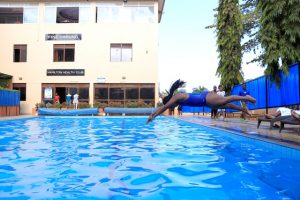 Falling into conversation with the friendly staff, I picked a few anecdotes about the place. It is not a very old establishment because it was never meant to be a public place. The proprietor had settled here years ago, built a beautiful family mansion set in two acres, complete with a plantation of Matooke (cooking bananas). It was all cozy and warm until the children started to grow up and one-by-one, went their own way. Suddenly there was too much space for just two adults, the solitude numbing. That is when the couple decided to raze down the acre of Matooke, replacing it with lawns, a swimming pool, tennis courts, a  restaurant and bar area. Two new blocks were raised to accommodate a gym, sauna and massage parlor, while the original building was converted into accommodation for 12 people. 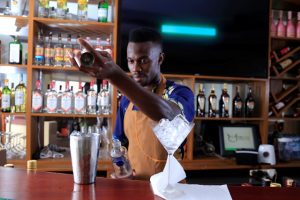 The Harp’s Mixologist doing his thing

A leisure establishment is remembered for its food and drinks. The proprietors went on a head-hunting spree, bagging a couple of seasoned ex-Sheraton hoteliers. One heads the Halal kitchen while her counterpart runs the ordinary kitchen for the likes of me and you.

Hadijah Namutebi is in charge of the Halal kitchen. She goes about her job with a relaxed demeanor. It is not something their will shove into your face but if you engage long enough in conversation, you will learn a few other tit-bits about the people here. Hadijah has actually served two presidents in her career. In 1998, she the lot fell on her to make former US President Bill Clinton’s Greek Salad. Ordinary folk may not know that the late Zimbabwean leader Robert Mugabe, entirely depended on raw green foods and it was Hadijah again on whom it fell to craft the unusual meal.

I have my accident to thank for discovery of the Harp. I am neither a swimmer nor the sporting type but looking at other people do is brings its own satisfaction. The Harp is a place I would visit again, if only to escape the noise of the city, read a book or to just while the time away in a hammock under the cool shade of a tree.