July 5, 2018—CDC Group has told DFCU Group, the parent of listed dfcu Bank, of its intentions to reduce its 15 pc stake in the Ugandan holding company which has major interests in financial services and commercial real estate. 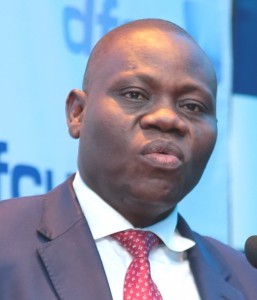 Kisaame said the CDC Group has been a committed and dedicated shareholder in DFCU.

Based in London, CDC Group plc is a development finance institution owned by the British government and has been a major equity partner of DFCU for five decades.

Irina Grigorenko, CDC Investment Director in-charge of Financial Institutions said they are “undertaking a review of its investment in DFCU Limited which may lead to the disposal or some of some or all of its shares in DFCU over the short to medium term.”

Four years ago, Juma Kisaame, dfcu Bank managing director said,” Fifty years is not a short time by any means, but CDC has stuck with DFCU for 50 years. Even through the difficult times they’ve been with us. This is very important, for us to have a long-term shareholder who is committed and dedicated to the growth of DFCU, and who believes in our vision and mission in this country.”

Grigorenko said in part, “It is our aspiration to exit in a manner that causes minimum disruption to the business and ensures the orderly trading of DFCU’s shares.”

She said the CDC objective is to identify like-minded investors who could support DFCU in its new phase of growth. DFCU was set up in 1964 by the Government of Uganda and CDC. In 2000, DFCU started commercial banking through its subsidiary DFCU Bank. Over the last 50 years, CDC has been an active investor and provided advice to help the bank develop and grow. CDC’s investment in DFCU has allowed the bank to provide the long-term funding to support the SMEs which are vital to Uganda’s economic development.

It remains unclear how this will affect the bank but CDC expressed hope that DFCU would continue to “succeed with the support of Arise B.V., its major shareholder.”

With this support in mind, Kisaame said, “DFCU is predominantly an SME bank. Our main strength is in providing long-term funding because there is a real need; there is a big gap in that area. That is where the likes of CDC give us the edge, because they think long-term and they also provide us with the money which we can then use to intermediate.”