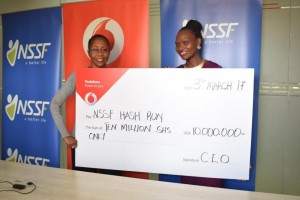 The ultimate aim is pulling resources together for renovating some Kampala public schools being managed by the Kampala Capital City Authority (KCCA).

Progress Chisenga,  the Vodafone Marketing Director said, “Education is one of Vodafone Uganda’s key focus areas and Next Generationers are a key segment in our business. We partnered with the NSSF as our contribution to the transformation of a generation we foresee as tomorrow’s leaders. Providing a conducive learning environment is critical to building this nation.”

This year, the target is UGX 200 million (about $55,500) which will go towards overhauling and refurbishing three primary schools. These are Makerere Primary School, Summit View Army Primary School and completion of
works at Nakivubo Settlement Primary School.

Although KCCA has the job of maintaining these schools, it is limited by financing shortfalls. This makes it difficult for the Authority to fulfill its obligations and has left many schools dilapidated with children studying under less than idea conditions.

Proceeds from the first edition of the Hash Run which was organized last year amounting to UGX 65 million went towards renovating Nakivubo Settlement Primary School and the construction of a water facility at St. Ponsiano
Kyamula Primary School.