July 25—Uganda Revenue Authority (URA) registered a revenue shortfall of UGX457 billion (nearly $130 million) in the financial year 2016/17 due to reduced imports from which usually a significant amount of tax is derived as customs duty.

Last year finance minister, Matia Kasaija said he hoped to raise just over UGX 13 trillion ($3.6 billion) from taxes but will have to do with UGX12.7 trillion. On the other hand, total collections are up 13.2% compared to the previous year. 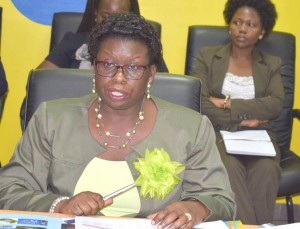 Akol said the downturn in economy affected imports from which URA derives a significant chunk of tax revenues.

Speaking during a news conference, Doris Akol, the URA Commissioner General, said the shortfall reflected the general downturn of the economy during 2016 which saw the GDP growth rate slow to 3.9% compared to the projected 5%.

“Only 26% of the goods imported pay revenue. Wet imports (petroleum) saw a significant drop in volumes from a projected growth of 9% to 1.5%, yet this is our highest revenue earner,” Akol said.

She said the volumes of imported wheat, petroleum, electrical apparatus and footwear reduced significantly. Consequently, a total of UGX388.1 billion in customs revenue was foregone.

She said that an estimated UGX68 billion was lost in wheat imports largely due to the VAT (Value Added Tax) exemption announced in the previous budget, while another UGX80 billion was lost in items like electrical apparatus, footwear and ethyl alcohol.

Many business people warehoused their goods while others re-exported them, further affecting customs revenue returns. Re-exported goods registered a growth of 11.37% in 2016/17 compared to a decline of 3.88% in the year before.

However, Dickson Kateshumba, the URA Commissioner for Customs said the reinstatement of VAT on wheat imports in the new tax regime will help to turnaround customs revenue. This financial year, wheat imports are projected to grow by 5% and the projected return in duty of UGX75 billion.

During the last financial year domestic revenue also suffered. Many companies  failed to remit their corporation tax in time due to low private sector credit, which in turn was related to the prevailing high interest rates and increasing levels of bad debts. Low demand for credit affected trade volumes especially in the manufacturing, construction, wholesale and retail sectors.

“Since most of the companies and businesses depend on credit to conduct business and pay taxes, reduction in private sector credit affected their profitability leading to the shortfall of UGX197 billion in corporation tax,” Akol said.