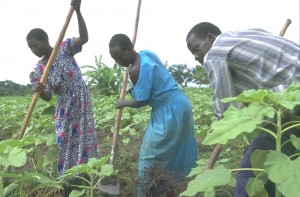 The project, being funded by the World Bank, will allow farmers to get inputs at drastically reduced prices and encourage higher productivity.

March 22, 2018—Several thousand farmers in northern Uganda are to get subsidised inputs in a $150 million World Bank project, being overseen by the agriculture ministry, to grow a range of crops including rice, maize, and cassava.

“I want to inform you that this project is for you Ugandans. Let us not fail it. We need to ensure that famers benefit from it. It is the reason why I and my teams are here today. We want to consult you and work with you from the very beginning,” Christopher Kibanzanga, the junior minister said while officiating at the project launch in Amuru District in mid-week.

Six districts from Acholi sub-region are cash in on the Agriculture Cluster Development Project (ACDP), but eventually it will cover 42 districts across Uganda.

Farmers in Amuru, Gulu, Pader, Kitgum Agago and Nwoya will benefit from the project through an e-voucher system where they will receive subsidised agro inputs with an aim of raising farm production and productivity.

The Minister said the project is designed to raise farm productivity and marketable volumes of selected commodities in specified geographical parts of the country in a series of clusters.

The four clusters are Amuru and Ntunguma for rice; Nebei for cassava, and Iganga for maize while Kalunga is pegged for coffee.

ACDP will be rolling out a subsidy programme where farmers will be expected to co-fund purchases of inputs. In the first season, the farmer will contribute 33% of the cost of inputs while the project will contribute 67%.

Designers of ACDP want to empower the local people economically through increased household income as a result of increased agriculture production.