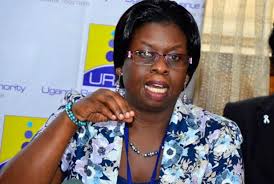 Akol blamed subdued performance of key growth sectors such as banking and telecoms for the Ushs 400bn shortfall.

“As a result of a strained economic environment, we registered a decline in revenue collected in four out of our five top sectors. The only sector which posted positive results was the wholesale and retail sector but the growth rates were very insignificant because they account for less than one percentage point,” she said.

A local unit that depreciated 25pc during the year and a -7.6pc slide in non-fuel imports added to the woes. The manufacturing sector declined 65pc while the financial and insurance sector also fell 27pc, information and Communications sector10pc.

Although revenues were short of target, Francis Kamulegeya a Country Partner at Price Water Coopers says the 15 percent year-on-year growth is commendable given the tough economic environment that saw a spike in non-performing loans as borrowers failed to meet commitments.

There were some bright spots however. Domestic revenues contributed more than half of collections – a health development as East Africa moves towards a borderless trade territory.

Akol is however optimistic that the tax body will meet its Ush13.1 trillion target for 2016/17.

“We have devised a number of strategies like sector based compliance initiatives, increased collaboration with government agencies and widening and building a tax compliance regime; we are positive these strategies will enable us achieve and surpass this target,” she says.