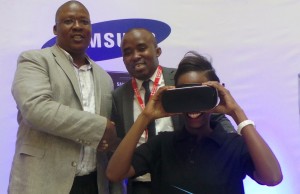 KAMPALA, MARCH 18-Ugandan technology enthusiasts finally got to feel the new Samsung Galaxy S7 today, at an exciting launch in Kampala almost two weeks after the devices made their global debut in Barcelona, Spain.

Billed as the most technologically advanced smart phone ever, the Samsung Galaxy S7 comes in both the revolutionary edge version and the sleek contemporary design. It is also water resistant and dust proof.

“It has a Snapdragon 820 processer which is the fastest ever built for any smart phone, fully charged it has 30% more battery life than the previous version and can be charged wirelessly if necessary, in addition the hybrid SIM card tray allows users to insert a microSD card for up to 200GB of additional storage and in some select countries; the tray can be used as a dual SIM card port,” Mulago explained.

Ewdin Abaasa , also from Samsung says among other functions, the S 7 and S7 edge have geopixel technology which helps the user to focus on an object and take good quality photos even in the dark. It also has an inbuilt air conditioner which protects the phone from overheating.  The Virtual Reality Gear that comes with the phones allows users to connect their phones onto a headset and get a 360 view of the world around them, play games and watch videos.

The devices launched on the Ugandan market with both the country’s leading telecom operators MTN and Airtel offering early bird packages. Samsung has also partnered with Acacia Mall property managers Knight Frank to run a ten day Easter promotion during which customers will have the chance win a handset orf virtual reality gear set.

Knight Frank’s Head of Marketing Paul Mwirigi says the partnership will run from March 18 to 31stMarch 2016.

“Any customer who spends Ushs 70,000 in any of the tenant outlets at Acacia Mall automatically qualifies to participate in the raffle draw and stands to win either an S7 or the Samsung Galaxy S7 gear,” he said

Talking about one of the highly anticipated accessories the Samsung S7 phone comes with, the Samsung Virtual Reality gear which allows users to connect their phones onto a headset and get a 360 view of the world around them, play games or watch movies, Amos said “this is a revolutionary device that has taken the world of communications and entertainment by storm it works with all the high end galaxy phones starting from the note 4 and beyond. Buyers can purchase the S7 along VR gear at a special preorder concessionary price”.

Mulago however cautioned fans about the risk of counterfeits on the market and advised potential clients to purchase the phones from established service providers. Samsung will be giving out the revolutionary VR gear for free to the first 100 clients who purchase the S 7.

Besides the promotional exhibition at Acacia Mall where they are giving people an opportunity to try out the new device, alternatively pre orders can also be made at MTN premium sales outlets in Kampala and on the MTN website at a discounted price.