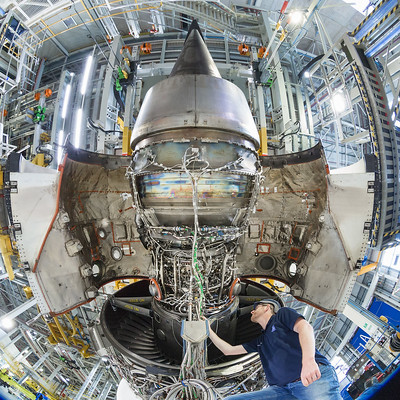 British aircraft propulsion systems manufacturer Rolls-Royce has resumed testing of its Advanced Low Emissions Combustion System its low-emissions technology ALECSys that will form the core for its next generation of engines.

The company says ground tests of an ALECSys demonstrator engine – with technology that features in both the Advance3 and UltraFan® programmes – have resumed in Derby UK. The technology is at the forefront of efforts to reduce emissions from gas turbines, a key part of Rolls-Royce sustainability strategy, “which also involves support for the increased use of sustainable aviation fuels (SAF) and intensive research into disruptive propulsion architectures and technologies.”

The system improves the pre-mixing of fuel and air prior to ignition resulting in a more complete combustion of the fuel, which in turn produces less noxious gas emissions.

The latest tests follow on the first series of tests which began in 2018. The new phase will focus on validating emissions performance, engine control system software and functional performance.

Andy Geer, Chief Engineer and Head of UltraFan, says the future of aviation can only be founded on greater sustainability and “these tests are one element in our drive to support that goal. We’ve been excited by our results so far and we are now going to push on and see what more ALECSys can deliver.”

The tests commence as Rolls-Royce starts to build the first parts for the UltraFan demonstrator, which will start ground tests next year. UltraFan is designed to deliver a 25pc reduction in fuel burn over the first generation of Trent engine.