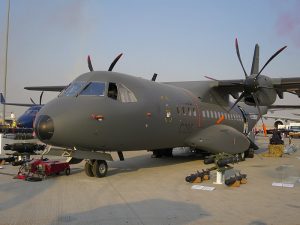 An armed Casa295 at the Dubai Air Show last November. The type is mainly used by the military

In a statement released yesterday, Airbus says DAC, which specializes in humanitarian missions in Africa, has leased the aircraft from Dublin, based lessor, Stellwagen Group.

DAC will be the first African civil C295 operator, of Airbus’s medium tactical transport that has previously been deployed in a number of roles including firefighting, search and rescue, signals intelligence, gunship and tanker.

Stellwagen Group ordered 12 Airbus C295s in 2017 with an option to purchase additional aircraft. The group will use the acquisition to serve the civil market requirements for specialist aircraft capable of operating humanitarian and freight missions in austere environments as well as supporting government agencies in search and rescue and other roles.

The Airbus C295 is a tactical airlifter in the light and medium segment. It is robust, rugged and reliable, able to operate from unprepared rough, soft and short airstrips on missions enduring up to 11 hours. It is a highly versatile aircraft, able to perform different missions including transport, medical evacuation, maritime patrol and surveillance, signals intelligence, and airborne early warning.

So far, 206 C295s have been ordered by customers around the world, including Algeria, Angola, Ghana, Egypt and Mali in Africa.

Until now, DAC Aviation which has been providing humanitarian assistance for over 25 years, was operating an ageing fleet of six De Havilland Canada Dash 8 aircraft