KAMPALA,APRIL 13 – President Yoweri Museveni is to participate in an unprecedented gathering of African heads […] 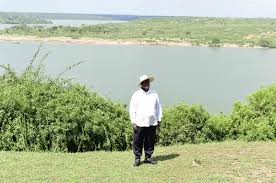 KAMPALA,APRIL 13 – President Yoweri Museveni is to participate in an unprecedented gathering of African heads of state, global business leaders, and A-list celebrities, to plot a new African-led path to ending poaching on the continent.

The event, in Kenya on April 29th and 30th, is the first of its kind. It is being convened by Kenya’s President Uhuru Kenyatta as part of his membership – with the presidents of Uganda, Gabon, and Botswana – of the Giants Club. The Giants Club is a select coalition of visionary African leaders enlisting the power of business and entertainment superstars to accelerate progress towards saving the African elephant from extinction.

In July 2015, President Museveni hosted Mr. Alexandar Lebedev and his son Evgeny Lebedev during their maiden trip to Uganda. The Lebedevs were in Uganda on a familiarization trip hosted by the Uganda Tourism Board and its partners.

Evgeny Lebedev, a passionate conservationist, philanthropist and patron of the Space for Giants club says that there is an urgent need conserve Africa’s most iconic species, which face extinction.

“My hope is that, together with corporate donors and other leaders across the continent, we can make an immediate impact, and so improve the prospects for some of the most beautiful landscapes, and animals, on earth. Time is short – but this summit is exactly the right way to address this critical situation, and I am hopeful for its outcome,” says Evgeny Lebedev.

President Museveni has been at the forefront of conservation, and has seen Uganda’s elephant population growing from a few thousand to over 6,000. Museveni was the first East African leader to endorse the Giants Club initiative in Kampala in July 2015. Uganda’s elephant population growth, though small in comparison to others, is a global success story where other nations are struggling with falling numbers.