Bernie Sanders and Donald Trump are destroying their respective parties—and for that, at least, we should […]

Bernie Sanders and Donald Trump are destroying their respective parties—and for that, at least, we should be grateful. 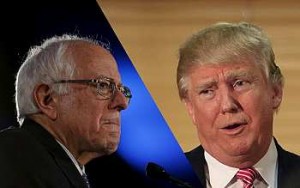 The only important thing—and certainly the most interesting thing—about the 2016 presidential election is that neither Donald Trump nor Bernie Sanders are real members of the parties for whose nominations they are running. Yet each is burning down his political home of convenience to the ground. Party identification is already at all-time low, according to Gallup, which finds just 29 percent of us are willing to admit to being Democrats and just 26 percent cop to being Republican.

With a few more strong showings in upcoming primaries, Trump and Sanders might even push those numbers down to single digits. Unless you’re one of those suckers still carrying water for political parties that reach back before the Civil War, you have no reason to fear their destruction. In fact, the best thing that can happen to politics is that the two major parties are forced to reboot themselves like a played-out superhero movie franchise.

Who can blame us for not wanting to be branded with an R or a D next to our names? The faltering, pre-primary anointees of each party’s establishment—Jeb! Bush and Hillary Clinton—inspire as much enthusiasm among the body politic as a long-scheduled colonoscopy.

Jeb—whose stylized, unintentionally hilarious exclamation point must have been suggested by someone who knows him very well and hates him very much—seems to be running only because it’s been eight years since a Bush has thrown his shadow in the Oval Office. Similarly, Hillary is too busy reciting her résumé to bother explaining why her reign as president would be any less clusterfucky than her generally disastrous turn as secretary of state. This is a woman, after all, who still points to America’s intervention in Libya as an example of “smart power” at its finest.

Together, Jeb! and Hillary left the field open to interlopers such as Trump and Sanders who, even though they are unconvincing as party loyalists, are nonetheless proffering cartoon versions of what it means to be a Republican and a Democrat. Each has distilled the essence of what liberals and conservatives have to offer and the parties thus implicated will be hard pressed to survive such an unironic display of core values.

Consider Trump, whose success so infuriated the editors at National Review, the conservative gatekeeping magazine that routinely endorses every Republican presidential nominee, that they published an entire issue on the theme, “Against Trump.” Among the Buckley boys’ complaints was that The Donald doesn’t quite hate Mexicans—whom he characterized as rapists and drug traffickers–with enough undisguised vitriol. Not surprisingly for a Republican Party organ, National Review’s editors chided the billionaire steak seller for saying he would let some Mexicans back in after deporting all of them and building a “beautiful” wall to keep them out. That’s an “implicit endorsement of the dismayingly conventional view that current levels of legal immigration are fine.” He is also “a menace to conservatism” and “crude.”

Yet for all of the he’s-not-one-of-us bluster against Trump, he does a passable impersonation of a National Review–style conservative Republican for most of us. He is by his own words strongly against immigration (which NR’s editors call a “defining” issue for today’s right-wingers). He is obsessed with displays of masculinity and dismisses opponents as “weak” and as pussies. His trucker-hat promise to “Make America Great Again” is simply a (slightly) dumbed-down version of conservative Republicans’ fixation on “American exceptionalism” and Barack Obama’s supposed contempt for the same.

Trump may indeed be “philosophically unmoored”—unlike Ted Cruz, he doesn’t know or care enough to sprinkle his applause lines with bon mots from Ludwig von Mises or Ronald Reagan—but nobody would confuse him with, say, a liberal Democrat, would they?

No, that would be Bernie Sanders, who is causing equal levels of discomfort among the Democratic Party establishment by admitting that he’s not really a socialist. He just wants to give away a ton of free stuff, most notably education, health care, and retirement but also paid family leave and a laundry list of whatever else he can think of. When he got into the race, he refused to apologize for being a tried-and-true socialist, which he redefined later as being a “democratic socialist” and now characterizes as simply wanting to import the very best Denmark has to offer before it becomes even more like the United States.

As was clear from the Democratic debate in Milwaukee, Sanders is not quite as transparent as he would have us all believe. When he was directly asked how much he thought the federal government should spend as a percentage of the overall economy—the current figure is already a historically high 21 percent—he dodged the question, even as he outlined his plans to give more stuff to more people. Back-of-the-envelope calculations done by The Economist find that such largess would require “new taxes on most workers worth 8.4% of their income” and still be short around $1 trillion a year. Nor has he explained why his home state scrapped its unworkable experiment in providing single-payer health care (the governor shut it down in 2014, saying it would require “enormous” taxes).

Hillary Clinton, no slouch when it comes to buying votes with promises of free (or free-er) health care, college, and all the rest, distanced herself from Sanders’s plans in Milwaukee, saying that the still-unpopular Obamacare originated as Hillarycare and was good enough for government work. Mend it but don’t end it, she counseled. She’s the pragmatic one, she implied again and again.

But it’s clear that when Clinton wins the nomination—the corrupt super-delegate system employed by the Democratic Party will see to that, thank you very much—she has already lost the thread of whatever her presidency might have been. Like Jeb! Bush, Clinton has failed completely at articulating a larger vision that either she or her party can offer the country. If she did, she would end up simply echoing Sanders, who does a pretty good job of distilling what’s left of the Democratic version of the American Dream. For Bush and other establishment Republicans, the same problem holds. Trump is promising to “make America great again,” by which he means he will lead a country that once again issues orders to the world. Bush and other underwhelming presences such as John Kasich can only mumble that Trump isn’t philosophically consistent and that he’s mean, which has never troubled conservatives overly much (they believe in justice more than compassion, after all).

If it’s true that Trump and Sanders are the only candidates throwing off sparks, it’s worth underscoring that they are not genuinely popular among Americans writ large. Rather, they are generating intense responses among the shrinking ranks of partisans and dead-enders who respond to what they think are purer and purer distillations of what the parties really should stand for. As fewer and fewer of us choose to identify as Republicans and Democrats, those that still do will get harder- and harder-core until the number of true believers approaches zero.

And when that happens, the major parties will be forced to change what they stand for, not because they want to but because they won’t be able to win elections otherwise. Because of our first-past-the-post system, American will always have two major parties and there’s every reason to believe, at least for the foreseeable future, they will be called Democrats and Republicans.

But what those parties stand for—and what sorts of people can fit comfortably in one or the other—can and will have to change if they once again want to represent more than tiny slices of the electorate.