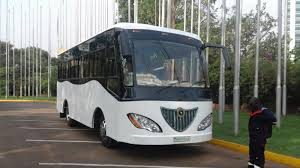 KAMPALA, FEBRUARY 26-Uganda is set to select a technology partner for the manufacture of trucks and buses in the country after several original equipment manufacturers expressed interest.

Speaking today at seminar where results from a three-month long Micro Analysis of the commercial vehicle market in Uganda were presented to stake holders, junior minister  for Higher Education, Science and Technology Professor Sandy Stevens Tickodri revealed  that Chennai based Ashok Leyland had signed an MOU for possible participation in  the establishment of a truck and bus manufacturing plant in Uganda.

“Others who have expressed documented interest are Mahindra-Mahindra from India, Sino Truck from China and e-Traction as an electric power train system technology prospective partner,” Tickodri said.

According to the minister Uganda accounts for 17.6 percent (440,000) of the 2.5 million vehicles that ply East Africa’s roads, which combined with the regional market provides critical mass for Kiira Motor Corporation’s products.

According to Kiira’s Ms Thatcher Nakimuli who presented the findings, overall brand perception and reputation among commercial vehicle users, emerged as one of the key factors to consider in the selection of a technology partner for in-country commercial vehicle manufacturing value chain development.

The study which among others sought to determine commercial vehicle usage and distribution in Uganda and asset finance products on the market as well as policy and investment incentives will help inform the planned establishment of a truck and bus manufacturing plant in Uganda.

Presentation of the findings comes just over a week after President Museveni unveiled to the public a solar –powered bus developed by Kiira Motors on February 16. Kiira Motiors which has also produced two concept cars – the two seat Kiira electric vehicle and the five-passenger Kiira Smack hybrid, plans to start commercial production in 2018 with a 350 unit run.

Kiira Motors Ceo Paul Isaac Musasizi who spoke about the automotive value chain said production would begin with components designed in Uganda but sourced from the global automotive supply chain, with capacity for local manufacture gradually being ramped up.

“We expect to be manufacturing 90 percent of the vehicle components by 2039,” Musasizi said adding that vehicles would only be built on order to avoid unsold stockpiles.

256 Business News has learnt from others sources that Kiira will begin taking pre-orders for the sedans that will be priced at $25,000 starting in the last quarter of this year.

The results of the study were welcomed by a cross-section of stakeholders comprising the Uganda Investment Authority, Uganda Free Trade Zones Authority, National Water and Sewerage Corporation among others who pledged support for the project.

UIA represented by its chief Dr, Frank Ssebowa revealed that it had already secured 100 acres of land for the manufacturing plant in Jinja while representatives from National Water and Sewerage Corporation and National Information Technology Authority said they would extend services to the area.

Fiona Muhumuza the Manager Strategy and Business Performance at NITA-Uganda said the first two phases of the National Communications Backbone were complete with 103 MDA sites connected, 98 of which were already utilising internet over the backbone.

NITA, she added, has secured bulk internet bandwidth and was able to offer data connectivity at lower cost.

“I liked the study presented here because it showed us the focus and determination of where Kiira Motor Corporation is going,” she said in reference to the market study.

The Ministry of Defence representative said they were open to buying from Kiira as long as the vehicles were up to the demanding uses of the armed forces and were readily serviceable.

Ambassador Julius Onen who chaired the discussion proposed an inter-agency approach under which the different government departments could commit funds under their budgets to cover those components of the project that fell directly under their docket. Such an approach he argued would help spread the financial burden and hasten execution.

“We will also need to address the issue of protecting our investment. At some point every country has protected its investment in automotives by getting in country end-users to buy local. Going  forward, we shall need a national conspiracy to drive this initiative,” he concluded.

Kiira which first an electric concept vehicle in 2011, plans to manufacture sedans, cross-over vehicles and buses and trucks.