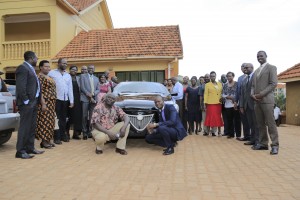 KAMPALA, MAY 03 – Uganda’s nascent automotive manufacturer Kiira Motors has secured endorsement by the country’s legislators after Members of the parliamentary Sessional committee on Trade, Tourism and Industry spending a day interacting with the team behind Africa’s first solar bus, the Kayoola.

Led by committee Chair Ms. Kabahenda Flavia Rwabuhoro, members called for increased funding to ensure that Kiira Motors Corporation remains on track to achieve its stated target of manufacturing vehicles in the country in 2018.

The legislators also pledged their support for a fast-track development of a comprehensive policy and legal framework for the automotive industry in Uganda.

“We pledge our support on the floor of parliament to increase funding for this important national project to manufacture cars by 2018. Government should quickly come up with a policy and legal framework that will regulate the automotive industry in the country. This will help government to own local content and also boost our policy of “buy Uganda, build Uganda,” Rwabuhoro said.

The Chairperson urged the Kiira motors team to popularize the excellent work they are doing to drive the vehicles made in Uganda agenda that has a high potential to contribute to the economic transformation of the country.

The Vice Chairperson of the committee, Ms. Grace Namara, said that parliament had already made a provision of about UShs10bn towards the development of the automotive industry in the next financial year 2016-2017.

Mr. Okot Odongo , the longest serving member on the committee with 20 years of service in parliament , thanked the Kiira team for applying their vast knowledge and innovations to create a business case for manufacturing vehicles in Uganda. He however, cautioned on the need to put out products that are locally and international competitive. “Quality is going to be paramount if the Kiira vehicles are going to be competitive on the global stage.”

He advised that KMC should in the initial stages of its development , partner with an already established Original Equipment Manufacturer (OEM) to ensure that  car manufacturing  becomes the biggest industry in Uganda.

“You should have empirical standards at every stage of development and your cars must be qualified and validated ,” he said as Ms. Kevina Taaka urged the Kiira Motors management to expose their good work beyond Kampala so that vehicles made in Uganda becomes  a truly national project . “You should solicit for the support of the entire country and marketing of vehicles made in Uganda will become very easy,”she added.

Earlier, while making a presentation to the committee, Mr. Paul Isaac Musasizi , the Chief Executive Officer of Kiira Motors Corporation (KMC) said that 12,000 direct jobs   will be created at the capital expenditure phase and another 2,000 created during the operation expenditure stage.

Musasizi ,said that  government, through the Uganda Investment Authority (UIA)  had already allocated 100 acres of land for the KMC car manufacturing plant located at UIA’s Jinja Industrial and Business Park. He said that the cadastral and topographical survey; environmental impact assessment; and geotechnical analysis of the site have been completed.

“This program has been supported by a wide spectrum of artisans, craftsmen and technicians especially in the informal manufacturing sector. These skilled personnel have demonstrated readiness for fabrication of vehicle seats, body building from metal and fiber glass, mechanical and electrical system physical integration.  And this is a true testament of the availability of a labour pool in Uganda capable of supporting the Automotive Manufacturing Industry, “ he empathized .

According to Musasizi, KMC will support the creation of vital infrastructure for Uganda (Power Plants; Standard Gauge Rail; Roads; National Fibre Optics Infrastructure; among others) through creating significant demand for the related services.