Home » Infrastructure » Communications » CEO: A350 XWB takes Ethiopian Airlines ‘to the next level’

CEO: A350 XWB takes Ethiopian Airlines ‘to the next level’

KAMPALA,JULY 05 -Ethiopian Airlines took delivery of the first of 14 Airbus A350 XWBs on June […] 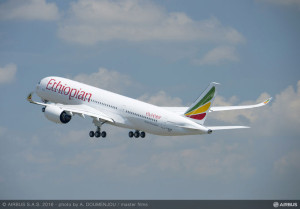 KAMPALA,JULY 05 -Ethiopian Airlines took delivery of the first of 14 Airbus A350 XWBs on June 28, making it Africa’s first operator of the type. It is also the Addis Ababa-based carrier’s first Airbus aircraft in its 70-year history.

“Adding the A350-900 to the fleet means the company is now moving to the next level. Our A350 and Boeing 787-8s are next-generation aircraft,” Ethiopian Airlines Group CEO Tewolde Gebremariam told ATW at the delivery ceremony in Toulouse.

The A350-900 is on a long-term lease contract from Irish lessor AerCap and will initially operate on routes from Addis Ababa Bole International to Lagos and Dubai. “With a second aircraft, which [we expect] to arrive in August, London Heathrow will become an A350-900 destination. Later on, the A350s will operate on seasonality and demand on our long-haul network, like China or the US,” he said.

Asked if he worries about fleet commonality with a mix of Boeing 777/787s and A350s in operation, Gebremariam said, “The Boeing 777s … have been in service for a period of time. We need to upgrade to the latest technology, taking advantage of all the new features, which are having a positive effect in our direct-cost operation.”

He said Ethiopian’s aircraft selection depends on which routes it decides to open. “Then we select the fleet, in terms of range and demand,” he said.

The 777s will remain because on some routes the aircraft is ideal for the high sea-level altitude airport at Bole. “The high sea level is a challenge, but the A350 takes this challenge. The A350 is slightly larger than the Boeing 777-200LR and a bit smaller than our 777-300ER,” he said.

Gebremariam said that in about five to 10 years, a new airport in Addis Ababa will be in service. When asked if Ethiopian would need very large aircraft, like the A380, he said, “At this moment, we are quite satisfied with the less than 400-seat capacity, but in the future why not?”

With the new A350, the number of aircraft in Ethiopian’s fleet stays at 79. “Another new Boeing 787-8 is coming from Seattle the day after [June 30].” However, this is one of the first early-build serial numbers, which is powered with Rolls-Royce engines, different from Ethiopian’s 13 GE-powered 787s. “Yes, commonality is good in terms of spares, but that [engine] was not available [for the early-build 787s],” Gebremariam said. ATW understands Ethiopian received a good deal from Boeing to take these aircraft.

Gebremariam has also indicated an interest for the larger variant, the A350-1000. “As soon as we know more about this aircraft, we will think about it. But let’s face it—there is a competitor,” he said, referring to the Boeing 777X.

Airbus COO Tom Williams said the first A350 delivery to Ethiopian Airlines “improves our footprint in Africa.” He told ATW that Airbus plans to deliver about 50 A350s by the end of 2016, despite delays in receiving cabin equipment. “This will be a very busy summer [for Airbus]. There are a lot of [A350] aircraft in the system, and there are much more [deliveries] during this year,” he said.

Ethiopian Airlines is also in the final stages of adding its own A350 flight simulator, which will be located in the newly built flight operations building at Bole International Airport.

Ethiopian Airlines will take delivery of 12 additional aircraft between July 2016 and June 2017.