KAMPALA, SEPTEMBER 16 – Who will be the losers and winners as Uganda’s Crane Bank restructures? […] 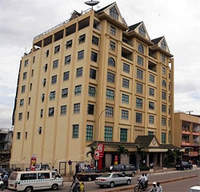 KAMPALA, SEPTEMBER 16 – Who will be the losers and winners as Uganda’s Crane Bank restructures? In media statements today, the bank has confirmed that it is seeking a strategic investor after plans to list on the Uganda Securities Exchange run into obstacles.

The question now is who of the existing shareholders are likely to dilute their equity in the bank. According to the current position, at 47.33pc, little known White Sapphire Limited, believed to be an SPV for local political interests holds the largest block of shares in the bank. It is followed by Sudhir Ruparelia who individually holds 28.83pc although the combined share of his family weighs in at 48.66pc.

In its statement, Crane Bank admits that it is not in an ideal position, confirming earlier reports that it was sagging under the weight of bad loans that brought its 2015 balance sheet to negative 3.1 billion Uganda shillings, a shocking development for an institution that appeared to have been blessed by a Midas touch. Now the bank is struggling to break the Gordian Knot by bringing new investors on board. “The strategic equity investor approach is aimed strengthening the Bank’s balance sheet further,” the statement says.

From that statement, the aim of the equity dilution is to recapitalise the bank. This site reported earlier that Crane Bank was in urgent need of recapitlisation after non-performing loans drilled a deep hole in its capital. The Bank of Uganda requires the shareholders to raise new capital to fill any hole created by unpaid loans. The new capital would be contributed in proportion with each individual shareholders stake in the bank. Stock holders unable to respond to the capital call would see themselves diluted out of the business.

That is the fate likely to face Tom Mugenga who is already in distress and may not be in position to contribute new capital. Given their nature, the shareholders behind White Sapphire might also opt for dilution. Part of that stake could go to an altogether new investor but it is more likely that Sudhir could advance his position in the bank given that two years of searching have not yielded an investor that fits the description that crane Bank talks of in its statement.

In the past eleven months, this site has received discreet enquiries about the composition of Crane Bank’s and the Ruparelia Group’s ownership. A major concern for prospective investors has been the perceived involvement of key political figures in the bank’s ownership. That is either a myth Crane Bank needs to debunk or a hurdle to overcome before it can become palatable to multinational investors.

If the stalemate continues, Sudhir may be left with no choice but dole out more of his personal funds either as a loan to the institution or share option. The former would preserve the status quo for now while the latter would result in more dominance by Sudhir, a  development that would further push back Crane Bank’s ambition of becoming a listed financial institution.

It as an ambition that combined with a recent expansion spree that has seen its branch network grow to 46 branches, Sudhir has been pursuing with the sole aim of having Crane Bank categorised as Systemically Important Financial Institution. That would come at the price of steeper capital reserves requirements, but would confer some protection in that the Bank of Uganda would be obligated to ensure that it does not fail.