Uganda Airlines has secured enough bookings to achieve operational breakeven on its maiden flight to the Somali capital Mogadishu that takes off at 5.37 am on Thursday.

According to Ms Jennifer Bamuturaki, the commercial director at the comeback flag carrier, by mid-afternoon Wednesday, fourty passengers had confirmed travel on UR 520 to Mogadishu that will be served using the carrier’s 76 seat Bombardier CRJ-900.

“The bookings are looking up. We had a slow start on Nairobi but that was because of the sense of uncertainty occasioned by postponement of the launch dates from July to August. We should be closer to a 50 percent cabin factor on the service to Nairobi within a week,” Bamuturaki told 256BN.

Uganda made a fresh bid for a slice of the regional air transport market with the commencement today of the first revenue flights to Nairobi and the South Sudan capital Juba. The service to Nairobi had eight passengers while Juba had 15 passengers.

UR202, the outbound leg to the Kenyan capital departed Entebbe at 6.05 a.m. local time today, touching down to a welcome of water canon at Jomo Kenyatta International fifty minutes later.

The resumptions of commercial services marks the end of an 18 year hiatus since Uganda liquidated its flag carrier amidst spiralling debt and a policy stance that favoured divestiture from public enterprises.

Fully funded by the treasury, Uganda Airlines has received the first pair of an eventual fleet of four Bombardier CRJ-900’ aircraft that will be used to form a regional feeder network ahead of the launch of long haul services to Europe and the Far East starting early 2021. Delivery of the first of a pair of Airbus A330-800neo aircraft that have been booked with Airbus, is expected in December 2020. A final airframe will follow in January 2021.Uganda hopes that having a home grown carrier will open new opportunities for its tourism and export sectors. 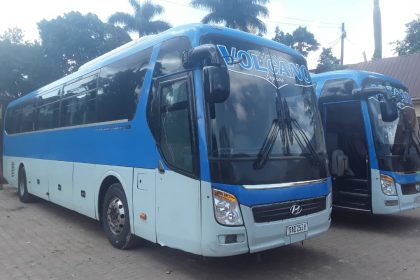