September 02, 2018 – Uganda was the tenth largest African market for Dubai based Middle-Eastern carrier […] 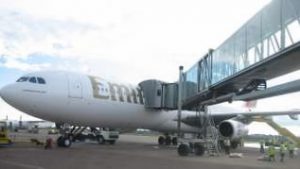 September 02, 2018 – Uganda was the tenth largest African market for Dubai based Middle-Eastern carrier Emirates during 2017.

According to statistics compiled by Routes Online, Emirates deployed 128,586 seats for departures out of Entebbe, giving Uganda a slot among its top ten destinations in the continent during the year. Uganda came ahead of bigger economies such as Angola (69,832 seats) and Ethiopia (124,382 seats) which checked in at 16th and 12th respectively.

Uganda narrowly beat Tanzania (128,118 seats) to the tenth position placing it eleventh overall among the 18 points from which Emirates operates on the continent.

Excluding Mauritius for which Routes Online, did not provide information, South Africa (1,101,217 seats) was Emirates leading destination in Africa followed by Egypt (335,772 seats) and Kenya (296,436 seats).

While Angola’s (69,832 seats) poor showing could be down to the impact of the commodity crash which impacted many extractives based economies globally and its tight economic integration with former colonial master Portugal, Ethiopia, Tanzania and Sudan’s (100,680 seats) could also be explained by the competitive landscape there.

Just like Nairobi, the airports in those countries are major hubs, leading to a significant fragmentation of traffic originating from there. Addis is the home of Africa’s largest airline, Ethiopian, which besides operating multiple rotations to Dubai daily; is also a major African super connector.

Like Uganda which has no national airline, Zambia proved a lucrative source market for Emirates which deployed 259,576 seats there, making it the fourth largest market for the carrier on the continent.

Globally, Emirates operated from 147 departure points in 78 countries during the year.